The Three Amigos and the North American Union 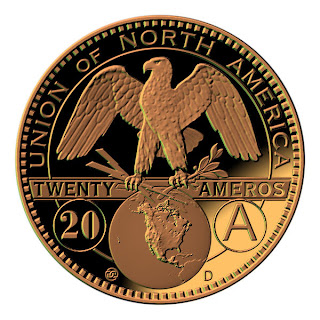 The three amigos are in the news. Harper is meeting with Obama and the president of Mexico to discuss free trade. Free trade is one thing but the north american security prosperity partnership is another. There’s nothing really wrong with free trade. Other than sending our jobs to Mexico so the large corporations can exploit cheap labour.

There have been various names for these secret deals that give courts more power than human citizens. First there was NAFTA. Then there was TILMA. Now there’s the NAU or more covertly known as the North American Security and Prosperity Agreement.

NAFTA opened Pandora’s box and TILMA let the plague loose. Under NAFTA UPS sued the Canadian government because they were unable to compete against Canada Post because they already had a delivery system in tact so they had an unfair advantage in being able to provide consumers with a cost effective product. I kid you not. That’s like suing Greyhound for delivering parcels because they already have a network of busses in place. Greyhound delivering parcels only makes sense. Suing them and trying to stop them so someone else can do the same thing at a greater cost is ridiculous.

If a democratic society chooses to create a public health care system and that system inhibited a private corporation’s ability to make a profit, then that democratic system would be illegal according to the absurd agreement.

Recently Stephen Harper announced that they would let armed US police officers patrol with Canadian police officers in Canada. That has nothing to do with free trade. It is a colossal concern when the US recently passed the most unpatriot act in recorded history that threw away the constitution and the bill of Rights.

Giving the military power to set up checkpoints and arrest “domestic terrorists” without a charge, without representation and without a fair trial is unprecedented and illegal. Especially concerning when at the same time England labeled everyone in the Occupy movement as a domestic terrorist. It is a huge concern when the government throws away the constitution and bill of rights. That is what wars are fought over.