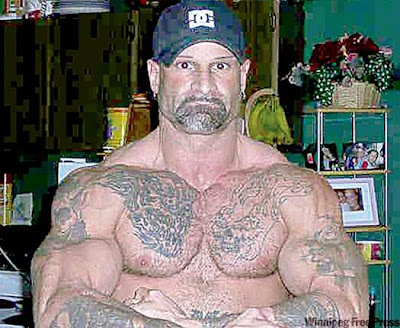 Well, the Rock Machine is starting to make the news in Winnipeg. The media claims Joseph Strachan is the president and has recently been released from jail. Another gang member who lives at home. It's OK. We know how hard it is to get a real job when you have a criminal record. That's why we keep telling you to stop selling crack.

We are getting mixed reports though. One media outlet claims Joseph Strachan's Winnipeg home was shot up last week. A St. Vital-area home belonging to Strachan's parents was then hit with gunfire and Molotov cocktails the following night. There were no injuries in either incident, and no arrests have been made.

That report would imply they were separate residences which would reaffirm the Hells Angels low life depravity of trying to burn down someones mother's home just like they did in Prince George. No wonder some of the Game Tight Soldiers are crossing over.

The Hells Angels created the Redlined Support Crew last year to stand up to other criminal networks that might muscle in on their former drug turf after many of their members were arrested and jailed following the huge Zig Zag crew bust.

Multiple sources have told the Free Press the Rock Machine has slowly gained power in Manitoba, with some former Hells Angels associates even joining their ranks in recent months. Just recently, a founding member of the "Game Tight Soldiers" gang in British Columbia moved to Winnipeg and joined the Rock Machine ranks, according to a source. "There is an active war between the Rock Machine and the Redlined."

Here's the beef. Standing up to the hells angels is a good thing but waging a war with them for the right to sell drugs is absolutely pointless. Recently a 14 year old boy was caught in the cross fire of a gang related shooting in Winnipeg. Jean Paul (J.P.) Beaumont is reportedly the sergeant-at-arms of the Rock Machine. His lawyer said his client is “disgusted” children and women have been put at risk in the recent violence and insists it has nothing to do with the group.

Yet Stephane Gillet has a long history of violence including kidnapping women and children. He denies it, just like they deny they sell drugs yet that is the whole point of the younger kids bringing back the violence. The Quebec biker war was over drug trafficking. No one wants that kind of violence to return. Betraying your own and burning down someones mother's house is deranged. Reporting that to the police isn't being a rat. Not doing so is.