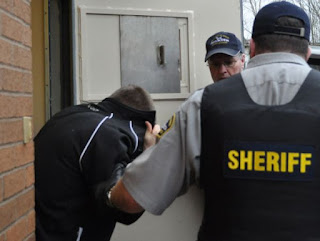 Curtis Lynds' preliminary hearing has been postponed until he can pay for a lawyer. Curtis Lynds? That's Hells Angel Jeffrey Lynds' nephew. Jeff confessed to murdering Randy Mersereau and is on trial for three other murders. If someone can't afford a lawyer, one is appointed by the court. This looks like a very strange stall tactic.

Curtis Lynds, who lived on Hiram Lynds Road until his arrest on drug trafficking charges in 2007, was charged on with being an accessory after the fact in Mersereau's death for allegedly helping his uncle, Jeff, escape custody.

He was a drug dealer who lived at the mansion on the hill. The delay, Burke argued, would give him an opportunity to put forth an application on Lynds' behalf to request that four parcels of seized land in Lynds' name be sold, and the money used to cover his legal fees. Ah so money really isn't the issue. He just wants the proceeds of crime back.

One reader pointed out that the Mansion on the hill that Lynds lived in was mysteriously on the same street as where Randy Mersereau's body was found - Hiram Lynds Road in Colchester County.