The Cost of Incarceration 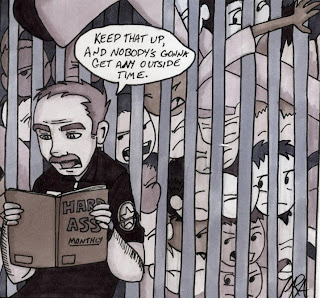 Canada's annual prison costs jump 86 percent to $3B in just five years. As we contemplate raising taxes, reducing deficits, and prioritizing expenditures we do need to examine how much tax dollars we spend on what and why.

We have expressed the concern that the current Judaical system for violent crime is flawed. If you commit murder or if a group of people swarm and assault an individual, that crime needs to be taken seriously and have some kind of legitimate consequence to it. House arrest for trafficking cocaine for the Hells Angels is nonsense. Crimes committed with firearms need to be taken seriously.

The California prisons are desperately over crowded. Three to a bunk is excessive. As a result of the privatized prison system refusing to adequately address the issue, the courts ordered them to release one quarter of the prison population. That is significant. The most basic and obvious concern is that the release of prisoners has almost become a lottery as they aren't necessarily releasing nonviolent offenders first which is absolutely absurd.

Equally absurd is Harper's promise to get tough on crime then cut funding for the RCMP and the Gang task force. Crime prevention is an important factor in dealing with crime. Having police officers walk the beat in East Vancouver and in Surrey Central is a good thing. A police presence in those areas can help reduce crime. You don't have to spend a lot of money on Crime Prevention for it to be effective. Block Watch is a volunteer program that effectively gets the community involved in reporting crime and being aware of suspicious behaviour. Surrey Place and Guldford mall have volunteers to help patrol which has dramatically helped reduce the amount of car theft in those areas.

In California they incarcerate deadbeat Dads. No one likes a deadbeat Dad but throwing him in jail costs taxpayers money. Garnishing his wages costs the deadbeat Dad money. It really is that simple.

Yes there is crime associated with grow ops but the real problem is when the gangs take the BC pot and trade it in the US for cocaine to be sold here as crack. As soon as you bring cocaine into the picture the violence increases exponentially. As soon as you start selling crack or meth on the street the violence is off the hook.

Enforcement means not letting the gangs sell crack in public. That is the New York model. Mandatory minimum sentences for selling crack are needed. Mandatory minimum sentences for selling pot is disproportionate and since it would be so costly, it would prevent us from being able to incarcerate the violent criminals and in essence shoot ourselves in the foot.