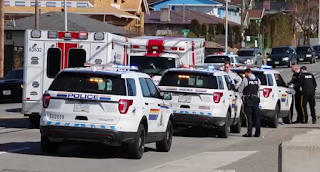 The Suurey Now Leader is reporting that "Surrey RCMP are investigating after reports that a man was shot at Hawthorne Park Sunday afternoon. BC Emergency Health Services and Surrey Fire Services were at Hawthorne Park at approximately 2:15 p.m. and were responding to reports of a man with a gunshot wound. Officers reportedly canvassed the area and had the scene behind police tape Sunday afternoon." Scan BC has been censored by the police.

CTV is reporting that "A man is fighting for his life in hospital after he was reportedly shot in Surrey on Sunday afternoon. BC Emergency Health Services said a patient in critical condition was treated in the area of 108 Avenue and 141 Street. Shots reportedly rang out at Hawthorne Rotary Park, a few blocks from where the man was treated."

The Surrey Now Leader is reporting that the police have confirmed the shooting. "Police say the man was taken to hospital and released later in the day, where he was then arrested and taken into custody in relation to outstanding warrants for his arrest."