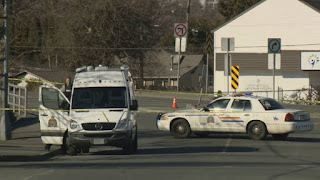 Global is reporting that "Police are investigating after a man was killed in an early morning shooting in Chilliwack Sunday. RCMP were called to the 45700-block of Alexander Avenue just after 6:30 a.m. for a report of a man with gunshot wounds. The man, who police say was in his early thirties, died at the scene of his injuries. Investigators believe the shooting was targeted, adding the victim is known to police." This is the third shooting Chilliwack has seen in two weeks.

A woman died from a shooting in Chilliwack earlier this month.

The Chilliwack Progress is reporting that "The RCMP’s Integrated Homicide Investigation Team (IHIT) has identified the victim of Sunday’s murder in Chilliwack as James Edward Vidal."

" Vidal is well-known to police with numerous criminal convictions, mostly in Chilliwack, dating back nearly 15 years. He has nothing, however, listed on Court Service Online in the last three years with his most recent conviction in August 2016 for break-and-enter, assault and assault causing bodily harm with two other co-accused. His older brother Curtis Vidal is even more well-known to police, most recently having been convicted of a violent home invasion in 2016 and sentenced to eight years in jail."