Prisons system in the US vs Norway 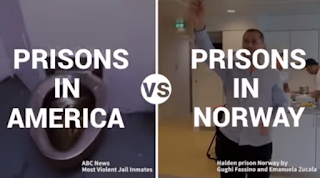 A friend of the family who did some serious time in the US prison system shared this video on Facebook. It compares the US prison system to that of Norway. Two different worlds. It goes along with a funny episode from the Netflix series Lilyhammer where the New York mafioso does some time in a Norway prison and says to his lawyer get me out of here. This is like a freaking Christian bible camp. It was pretty funny.

People here would say that's the last thing we want. Prisons in Canada are too soft as it is but are they realy? Take a look at Norway's reoffending stats compared to the US. In the US 76% of inmates reoffend within 5 years of being released. In Norway it's only 20 %. Those numbers tell a story. In the video one of the prison wardens state that every prisoner will one day be released into society. Do you want all of your inmates to be angry or rehabilitated?

Obviously we don't want prisons to be country clubs without consequences. Yet giving inmates opportunities to advance their education and do something positive in prison will help them when they are eventually released into society. As well as being wrong, torturing them is counter productive. Recently there were seven spoilt brats who had a quiet riot in a youth facility in BC and trashed the place. Don't reward them, make them face a logical consequence. They don't get to stay in that country club any more. They have to go to a facility less desireable now. You can make inmates face consequences without torturing them.

Locking up someone for 30 years for a drug offence is counter productive when everyone knows they were just a mule and will be replaced by someone else. The Hells Angels are the biggest drug traffickers in Canada yet they are small potatoes compared to the CIA who supply them. We need to stop kicking the cat and deal with the real issue or it will never be addressed.

Since Norway has such a successful rehabilitation rate I guess it's only fitting that the support group for former gang members is based in Scandinavia. Michael Green is the new Godfather. 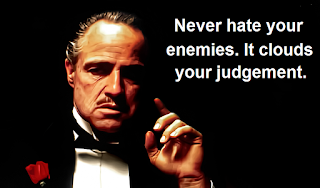