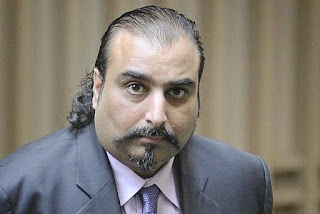 Rob Sidhu is a bit of a local celebrity. He's a dirty cop that was convicted in the United States for cocaine trafficking tied to the Hells Angels. He was handed an eight year sentence in the US. Prior to that Judge John Lenaghan let him walk away free in Canada on impersonation charges. In that case he falsely represented himself as an active member of the RCMP after he had left the force to obtain information about the Bacon brothers location. Hells Angels lawyer Matthew Nathanson represented him in that case and Judge John Lenaghan let him off.

The Water Crimes blog as well as the Citizens against the BCIMC blog have both expressed concerns about Judge John Lenaghan's personal bias. Just like Peter Leask.

Update: Gordon Clark from the Vancouver Province just wrote an editorial about judicial accountability. More and more people are speaking about the issue because it keeps coming up over and over again. Judges need to be accountable to the people who pay their wages. This judicial arrogance needs to subside.