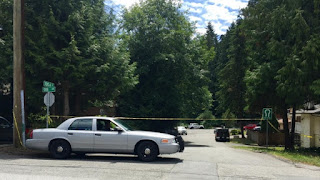 1130 News is reporting that "Homicide investigators have been called in to investigate a death in Surrey’s Bog Park. The man’s body was found at the park at 130th Street and 98th Avenue around 2 p.m. yesterday. IHIT says he “appeared to be the victim of a gunshot wound.” The victim has been identified as 27-year-old Brendan Chand. Investigators say several people reported hearing gunshots in the area as early as 10:30 p.m. on Saturday."

In 2014 the Vancouver Province reported that Brenden Chand was a drug dealer who shot a man in the back as he was fleeing from him in a busy SkyTrain station in Burnaby. The Surrey Now confirms that this homicide victim is the same drug dealer who was convicted in the 2011 shooting which has also been confirmed by CKNW and the CBC.

Update: The was also a suspicious death in Prince George.

Kelowna Cap News is reporting that a 31 year od woman was shot in a west Kelowna home and a 28 year old male has been taken into s=custody.

Posted by Dennis Watson at 1:37 PM