Tony Blair takes the fall for the Iraq War 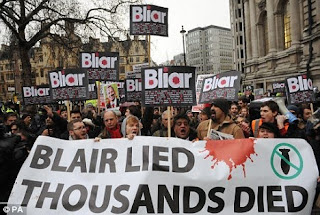 A new report resulting from a seven year inquiry has slammed Tony Blair for supporting the unlawful invasion of Iraq based on a lie. Obviously this is nothing new. The report is and it's rekindling quite an uproar in England. It reopens the murder of the whistleblower Dr Kelly.

The Telegraph is reporting that Tonly Blair could be impeached and put on 'trial' in Parliament to account for his actions in front of MPs and peers. Hmmm, he's no longer Prime minister. Putting him on trial in front of the peers who supported his criminal act wouldn't be very accountable. In contrast the Independent is reporting that Tony Blair could be sued for 'every penny' by families of soldiers killed in Iraq War. Now we're talking. Him and George Bush Jr both. After all Tony Blair was just doing what George Bush asked him to do. That's why he won the CONgressional award for deception. Blair was the forerunner for Operation Mass appeal where MI 6 knowingly sent out false press releases about Iraq's Weapons of Mass Destruction to sell the lie to the public. The problem is, Tony Blair is gone but MI 6 and the CIA isn't. Sue them. 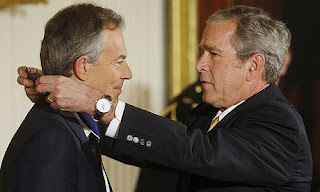