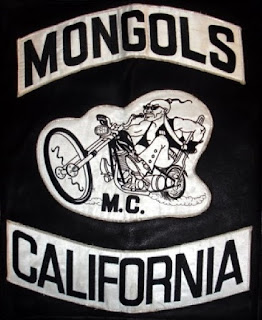 TBM USA and TBM Scandinavia are reporting that former Mongols National President Ruben “Doc" Cavazos is out in bad standing. My first impression was sadness. Doc Cavazos was a good guy. Why do the MCs always eat their own? One minute it's L&R Friends Forever Forever Friends, then the next minute it f*ck you you're an enemy and a piece of sh*t. The honeymoon never seems to last forever. Maybe maybe Doc Cavazos would like to join TBM now.

So then I decided to take a look at the other side of the story. Why is he out in bad standing? The Mongols web site claims he cut a plea deal and became a government informant. What?! No way. Say it isn't so. Quite often the HAs will say so and so was an informant when they weren't to rationalize why they killed them. Take Brittney Irving for an example. She was not a police informant. They simply screwed her over for a manufactured debt.

Doc Cavazos' case appears to be slightly different. He was handed a 14 year sentence under Operation Black Rain. The whole incident appears to be someone suspect. At the time they claimed they were set up and the ATF falsified evidence. The case appears to be based on the Nicola’s Shooting. We're not talking about getting caught shipping massive amounts of cocaine like the ATF did in Operation Fast and Furious. The Mongols real crime appears to be the fact that they have access to weapons and are Hells Angels rivals.

The controversial and most significant aspect of the case against Doc Cavazos is the ATF's attempt to seize the Mongols patch and trademark. This quest failed on September 16th, 2015 when Federal District Judge David O. Carter dismissed the case. However, the trademark quest continues as a new judge has been assigned to the case and the Mongols web site claims that Ruben “Doc” Cavazos flipped on January 23rd.

They state that "He seems to have gone quickly and easily. He was the very first Mongol to plead guilty to count one of the indictment. He confessed that he led a murdering, drug dealing criminal conspiracy called the Mongols Motorcycle Club. He also confessed “that the Mongols Registered Trademarks afforded a source of influence over the RICO enterprise that defendant admits he established, operated, controlled, conducted and participated in the conduct of….“As part of his guilty plea (Cavazos) agreed to the forfeiture of all right, title and interest in certain assets acquired or maintained by him as a result of his violation of (the RICO statute) including…the 'Mongols Registered Trademarks' or 'marks'” and admitted that the marks were subject to forfeiture to the United States."

"The government has also cited the guilty pleas to Count One of the Indictment by numerous defendants besides Cavazos as proof that the Mongols Motorcycle Club is a criminal conspiracy and the name and patch are subject to forfeiture. The government has argued that the pleas demonstrate a nexus between the violation of which the defendant has been convicted (or to which he has pled) and the property sought.”

That appears to be the Mongols concern and it appears to be valid. First they are quite right in that Doc Cavazos does not have the authority to hand over the club's patch and trademark since he is not a founding member nor the registered owner of the trademark. The whole underlying concern with this case is the ATFs determination to disband a Hells Angel rival and seize their patch. Is it a stepping stone to seize the Hells Angels patch or are they just going after Hells Angels rivals again? Remember the CIA infiltrated the ATF. The ATF were involved in a far greater drug trafficking ring in Operation Fast and Furious than the Mongols ever were by far. Why eliminate a small competitor unless they are trying to maintain their monopoly on the market?

I think seizing clubhouses should be done on a case by case basis. The Kelowna chapter were complete f*ck ups. The amount of drug trafficking and stolen car rings they ran was astounding. That clubhouse should be handed over in a consent order. The Nanaimo chapter should get their clubhouse back. Seizing the patch isn't even on the table. Banning them from wearing patches in bars is. Likewise the Slurrey chapter are also complete f*ck ups involved in nothing but drug trafficking. Their clubhouse shouldn't even be built. Not in Surrey that's for sure.

As for Doc Cavazos joining TBM Fresh start he is free to do so. Everyone deserves a fresh start in life. Michael Green is a better man than I am. He is like the Godfather of Repentance. In his last article he explains that TBM has former members of the Hells Angels, Bandidos, Outlaws, Rock Machine, Gremium, No Surrender, Satudarah, Devils Choice and many other bigger and small international groups including Neo Nazis and hooligans. Quite the mixed bag indeed. Personally I hate Neo Nazis. Flying a swastika is like pissing on a good soldiers grave. Yet am I willing to embrace someone who has left that order? Yes I am.

However, TBM accepts everyone. That means they accept people who are out in bad standing as well as people who have left the life by their own choice. In theory that means they would even accept people who became police informants or who cut a deal to get a reduced sentence. As I said I do believe everyone deserves a fresh start in life. However, if you became a police informant or ratted out your friends to get a reduced sentence, I'm not going to protect you from your enemies. That's something the police will have to do since that is the choice you made. I respect law enforcement but they aren't many that I trust. There is good and bad in every organization. The Hells Angels included.

Posted by Dennis Watson at 6:37 AM