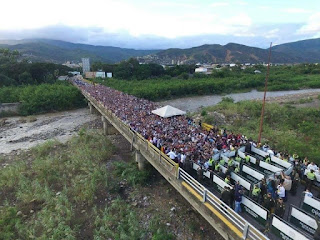 We've talked a bit about some of the atrocities committed in the name of Communism - Stalin, Lenin, Chairman Mao. We also mentioned briefly how Communism has failed in Venezuela recently. Well the situation has become epidemic and I'm not hearing much about it in the local news. Seemingly they can't even buy food at the grocery store. Recently the government has finally opened up the border for a few hour intervals allowing people to leave which has created a mass exodus into Columbia. If there ever was a need for humanitarian aid, this is it. 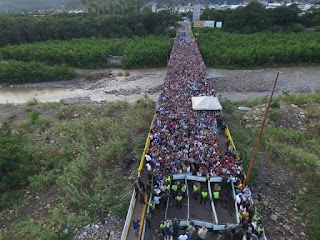 Seemingly these pictures are from today. The Panama Post reported that "On Sunday, July 10, more than 35,000 Venezuelans crossed the border into the Colombian city of Cúcuta. President Nicolás Maduro’s government, which was left embarrassed before the international community once again due to an exodus of citizens, had no option but to allow the massive border crossing eleven months after senselessly blocking all access to Colombia by land. In theory, Maduro closed the border to prevent smuggling, but recent events have proved that this was just another dictatorial measure on behalf of the Chavista regime."

I don't want to get into name calling over the cause of the meltdown. I just want to say that the government allowing people to leave is a good thing. Now let's see what we can do to help. Obviously if we can get food into the grocery stores people can stay in their homes and not be homeless in a foreign country. Peace.