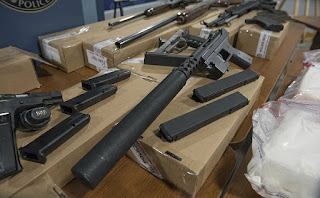 Global is reporting that "Toronto police say 27 people have been arrested in connection to a drug trafficking ring operating primarily in southern Ontario. Authorities say the year-long investigation led to the seizure of nearly 300 kilograms of various controlled substances, eight firearms and more than $2.3 million in cash."

"The weapons seized, meanwhile, included a TEC-9 submachine gun with a silencer, an AR 15 machine rifle, two shotguns and a number of handguns. Police have identified 40-year-old Kevin Er, of Richmond Hill, as the alleged ringleader of the criminal organization. Er is facing a total of 16 criminal charges."

Back in 2014, there was another large drug bust in Ontario dubbed project Anarchy tied to the the Alkhalils who as we all know, work for the Hells Angels. In 2013 the New York Post reported that Jimmy “Cosmo” Cournoyer supplied New York with BC Bud through the Hells Angels. That drug ring supplied New York with BC Bud and brought back massive amounts of cocaine into Canada to be sold as crack.