Tonight at 7:00 PM the Falun Gong held a candlelight vigil outside the Chinese consulate in Vancouver commemorating 17 years of persecution from the Chinese Community Party. Tomorrow they will be at the water fountain outside the Vancouver Art Gallery at 12 noon.

At first over 150 people showed up with huge banners protesting the Communist Party's persecution of the Falun Gong ranging from political prisoners, torture and even murder for organ harvesting. This issue is a lot more important that a family dog that got hit by a stray bullet in a drive by shooting or a handful of idiots demanding a safe inhalation site to smoke crack. 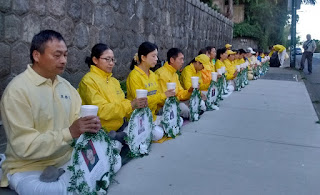 Half way through the evening everyone put the banners away, then sat with a candle holding a picture of someone who has been persecuted by the Communist Party. An interpreter explained the brother who sat beside me owned a business in China and survived a work camp there. She said he used to be very angry and got into lots of fights with bad guys back in China. After joining the Falun Gong he became much more peaceful and stopped getting into fights. That's when they sent him to prison. For joining the Falun Gong. He survived because he was very determined and focussed his mind. I believe it. He sat quite comfortably in a full lotus with a focussed mind. 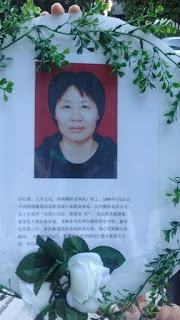 He was holding the picture of Hongxia Fu who died at the age of 45. She was an employee of Puyang City Coal Power Plant and suffered a great deal of persecution from the Communist party for her religious beliefs which were no different that the traditional beliefs of Confucius, Taoism or the Shaolin Temple.

Falun Gong is not a cult

Anyone with a brain can easily see that Falun gong is not a cult. They are Buddhists who believe in the Chinese traditional virtues of Zhen, Shan, Ren (Truthfulness, Compassion, Forbearance). They are a polite peaceful people who like to meditate to clear their mind.

One of the banners said Falun Gong is Good and that is true. The world is full of good and evil. Religious freedom is good. Religious persecution is bad. In the struggle between good and evil the Falun Gong are on the side of Good just like the Dali Lama. Buddhists are peaceful people. We should protect them not harm them.

It was heartbreaking to see each person pick up a picture with a story and a candle. So much suffering and so many human lives lost. The main Chinese character on the centre banner means remembering. The four smaller characters beside it all mean with sadness. Remembering the suffering and lost lives with sadness. Does anyone care? Why doesn't the corporate mainstream media? That censorship shames us all. Peace.

Update: This is a copy of the article in the Epoch Times.

This is the English translation of the article. 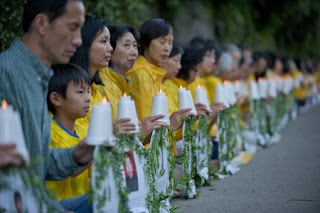