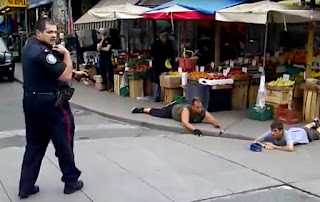 CBC is reporting that Toronto Const. James Forcillo was convicted of the attempted murder of Sammy Yatim, the 18-year-old shot dead aboard a streetcar in July 2013 and sentenced to six years in prison but is appealing the decision. We talked about this case before. What He did was wrong. That's all there is to it. He pretty much emptied his clip into the kid after he was already shot lying on the ground.

In 2012 a Toronto cop was charged with second degree murder when a suspect was found shot in the back. In 2015 three Toronto police officers were charged with gang raping a female officer. Evidently forming a Regional Police Force isn't necessary the magical solution.

Posted by Dennis Watson at 3:13 PM