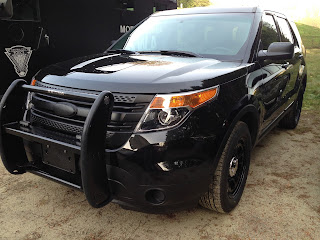 As I mentioned, I was there when Catherine Bruce read out her divinely inspired decision on the John Nuttall Entrapment case. I was also there during the SWAT takedown after John and Amanda were released. There was no need for that. It was yet another dirty deed done dirt cheap.

We went out for lunch on Commercial Drive to celebrate. After lunch we left the restaurant and started driving around looking for an address. I pulled over slightly on a side street so John's mother could check her phone for directions when a big black undercover police SUV pulled in front of us with it's lights on. I pointed to John's mother and said we just stopped to use the phone. I thought they were trying to nab me for using a cell while driving when I wasn't.

Another SUV had boxed us in from behind. All these cops with vests on get out and swarm us telling us to all get out of the vehicle. Then they changed their command and said everyone out of the vehicle but me. I was driving. I pull out my cell phone to turn on the camera to start taking pictures and the cop by my window ordered me to turn off my phone. I responded by saying Oh I suppose you don't want me to take pictures then. He replied no.

I repeatedly asked them what was going on and they repeatedly refused to tell me. I pointed to John's mother and said his mother has a right to know where you're taking them. The Canadian Charter of Rights states you can't just kidnap people at random, If you are going to arrest someone you have to charge them with an offence. What are they charged with? Still no answer. Finally they said something about a peace bond. They did not say a warrant has been issued for their arrest related to a peace bond application. They just said it's about a peace bond.

I simply said why didn't you do this at the courthouse before we left as we were half expecting they would want some kind of terms and conditions placed on their release. No answer. I said we are on the way to the lock up to pick up their belongings. Why didn't you do this there instead of traumatizing them all over again and handcuffing them on the sidewalk? I called out to John's mother and said Lawyer. Call their lawyer.

It turns out lawyers for the Crown made an ex parte application in Provincial Court in the DTES for a peace bond so they could put terms and conditions on their release. As I previously said, given the nature of the case we half expected this.

However, making an ex parte application without even notifying the other lawyers was a dirty trick. In court there are certain professional courtesies opposing lawyers extend to each other. In court lawyers refer to each other as my friend short for my learned friend meaning someone who is also learned in law and respects the legal process. Going exparte without notifying the other lawyers after they had been dealing with them in trial for over three years was unprofessional and unethical. Normally a complaint would be filed with the bar.

The judge was very clear in her verdict. There is no threat to public safety and there never was. The judge said: "The spectre of the defendants serving a life sentence for a crime that the police manufactured by exploiting their vulnerabilities, by instilling fear that they would be killed if they backed out, and by quashing all doubts they had in the religious justifications for the crime, is offensive to our concept of fundamental justice. Simply put, the world has enough terrorists. We do not need the police to create more out of marginalized people who have neither the capacity nor sufficient motivation to do it themselves. "

It is obvious lawyers for the Crown pulled this dirty trick because they wanted to get the terms and conditions before a different judge than one who had seen the evidence and knew the truth. They wanted to instill fear in a new judge by repeating the same lies they continue to tell the media. That by the way constitutes defamation. Normally judges become seized on a matter because they know the case and the process doesn't have to start all over again in front of a new judge. This was one in a long list of dirty tricks that apply to this case.

Outside the courthouse after they were finally released on terms and conditions the media repeatedly asked John what are his plans? He repeatedly said I don't know reinforcing the defense's argument that he didn't nor was capable of planning the absurd and heinous crime he was accused of. The media asked him if they planned to file civil action for the abuse of process the judge convicted the RCMP of. He replied No, I just want them to leave us alone. This is a wonderful couple that were completely screwed over and despite that are in no way vindictive. They just want to be left alone.

Setting aside the Appeal

It comes as no surprise that the Crown has appealed the decision so they don't get sued civilly for their misconduct and abuse of process. However, since it is clear the couple do not intend on launching a civl lawsuit and just want to be left alone, I submit that the Crown's Appeal be set aside until CSIS complies with the court order for them to produce documents they are in contempt of court for not providing. In reality, an application to have CSIS arrested for contempt of court would be far more appropriate than continuing this facade any longer.

In the timeline of events, CSIS was found in contempt of court before John and Amanda were released so that matter needs to be heard before the Appeal. It would be offensive to Natural Justice to proceed with the appeal until CSIS obeys the court order to disclose those documents which directly relate to the Entrapment case.

In addition, it would be clearly offensive to proceed with the Entrapment Appeal until CSIS is charged with murder for providing the explosives in the Air India bombing. That fact was reported by the RCMP and the CBC. Failing to charge CSIS in that murder but proceeding with the Appeal on this manufactured entrapment case would be offensive to justice and a misappropriation of tax dollars. They have wasted far too many tax dollars on this case already. Instead of spending tax dollars on this bogus appeal, it would be far more fiscally responsible to investigate what happened to the $3.1 billion they lost from their anti terrorism budget. Losing not using that much money from their budget is a far great act of organized crime than two marginalized addicts from Surrey who were threatened and extorted to assist them in a fake attack. 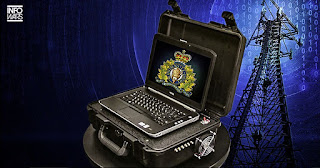 March 31 2016 The Right Edition reported that "Murder charges filed against six mobsters were dropped by the Canadian government Wednesday in order to keep details on cell phone surveillance technology concealed. The prosecutors, who convinced the defendants to instead accept murder conspiracy charges as part of a plea deal, were able to use the decision to halt a separate hearing that could have exposed information on the Royal Canadian Mounted Police’s IMSI-Catcher (Stingray)." Bill C-51 is in effect. They are watching all of us.

Posted by Dennis Watson at 9:13 AM