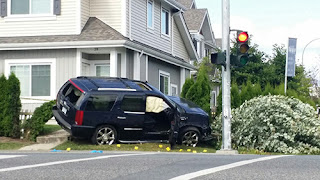 The Abbotsford News is reporting that "One man has been hospitalized with serious injuries after a shooting at Blue Jay Street and Cardinal Avenue in Abbotsford early Saturday morning. Police say they were called to the scene just after 2 a.m., with multiple people reporting shots fired and a single-vehicle crash. When they arrived, they found a 23-year-old man in a Cadillac Escalade with gunshot wounds. The vehicle had crashed into a power pole. The man was taken to hospital, where police say he is being treated for serious injuries."