Speaking of diversity, as I was riding into Vancouver yesterday along Kingsway I saw an eagle flying over head and heard some drums so I pulled over to have a look. It was the Chibi Taiko drummers performing. They were magnificent. I like drums and Taiko drums are awesome. Chibi means little kid and Taiko means big drum so Chibi Taiko is Canada's first youth taiko group based in Vancouver. They will also be performing today at 12:15 in Maple Ridge.

I moved to Surrey from North Vancouver when I was in grade five. Growing up in Elementary school my best friend was Japanese. It was just normal. Later on we lost contact and I had another good friend who was also Japanese. He became the best man at my wedding I was the best man at his. I spoke at his wedding and quoted Martin Luther King who dreamed of the day when a man would be judged by the content of his character not by the colour of his skin. I assured both families that my friend was indeed a man of honour.

I realize that historically there is some hard feelings between China and Japan as well as between Korea and Japan. As my father would say, the war is over. That was a long time ago. Japan paid bitterly for their aggressiveness with Hiroshima and Nagasaki and have endured many hardships of their own. It's time to move forward in peace.

Canada hasn't always been a place of perfect polite tolerance. During the war all of the Japanese Canadians were rounded up into concentration camps and their land was taken from them. That was before my time. I never knew or understood that growing up with Japanese friends. I later found out that the best man at my wedding had family on Salt Spring Island who had all their land taken from them. Although the family finally got an apology many years later, their land was never returned to them. That was tragic and stands as a reminder of how we need to be honest about our past so we can rise above it.

The paper crane has become an international symbol of healing and peace. I didn't realize Sadako's last name was Sasaki. That is the last name of my childhood friend growing up. What happened in Hiroshima and Nagasaki was horrible and we need to make sure something like that never happens again. Diversity makes us strong. Peace. 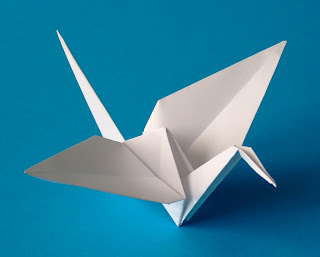