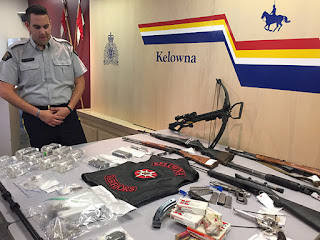 We know it wasn't a HA bust because it would have involved a lot more drugs if it was. The Kelowna Warriors are new kids on the block and appear to be connected to the Manitoba Warriors who are indeed Hells Angel rivals. October 2014 one blog reader said the Kelowna Warriors now exist. This bust proves they were right.