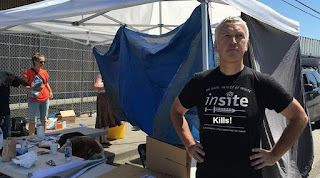 Thanks to the new illegal pop up lethal injection site on the Whalley Strip, the Surrey Now is reporting that a man and a woman were wounded in what police say appears to have been an accidental shooting right there at at 135A Street and 108th Avenue. Now we can charge VANDU directly for accessory to the illegal use of a firearm right at their own lethal injection site. They want to help them shoot up but they don't want to take legal responsibility for what they do when they under the influence of the poisonous drugs. Sue them! 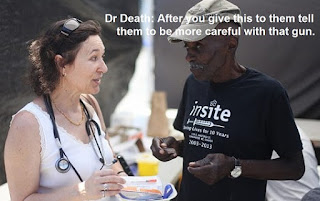 Two weekends ago there were 43 drug overdoses because of fentanyl in crack cocaine. It had nothing to do with heroin and the criminals are exploiting the opportunity to publically break the law. Surrey has no right to bust another grow op as long as they let this illegal lethal injection site continue. The whole community suffers when the police and City Hall refuse to enforce the law. The logical solution is to arrest the drug dealers that sold the crack laced with fentanyl.

What about the fentanyl fatality at Shakerz? Doesn't anyone care about that? Are we going to set up a lethal injection tent there too? We have already established on this blog that VANDU sells drugs. They aren't a drug user support group they are a drug dealer support group.

Letting VANDU set up a tent for people to smoke crack and shoot heroin is no different than letting the Red Scorpions or the Independent Soldiers do it. There is nothing compassionate about it. We are feeding addiction and attracting every potential drug addict to Surrey. That is not in anyone's best interest. An ounce of prevention is worth a pound of cure.

Where's Snoop Dog when ya need him?

CBC reported that the B.C. government has released details of a damning audit that shows a non-profit group that looks after some of Canada's poorest citizens spent thousands of dollars on lavish hotels, limousine rides, expensive dinners and even a trip to a Disney resort. Separate financial reviews examining expenses by the Portland Hotel Society — which runs Canada's only supervised injection site — have uncovered alleged misuse of corporate credit cards, unsupported expenses and inadequate criminal record checks.

The Huffington Post reported that Jenny Kwan is back from an unpaid leave she took after government audits revealed financial irregularities at the Portland Hotel Society, including lavish travel expenses. Kwan says she believed her former husband Dan Small covered the travel expenses for herself and their two children, but audits reveal the society covered the costs. Those aren't volunteers at the Portland Hotel Society. Those are paid staff members.

Update: The Peace Arch News is confirming the fentanyl fatality at Shakers they just aren't saying where it happened or that it was cocaine not crack. Her name was Leanne Yardley.