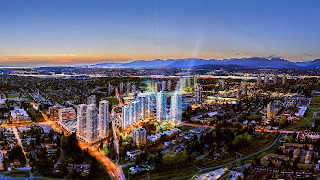 The Vancouver Province is reporting that "the City of Surrey is continuing its search for a location for a new homeless shelter in the face of opposition from business owners near a proposed site in Whalley. Elizabeth Model, CEO of the Downtown Surrey BIA, said the businesses are struggling."

“We’re trying to build a city centre that is inclusive, integrated and adaptive to all citizens. Given we all have the same goal for the city of Surrey, there is no clear rationale why the city has chosen this location for another shelter,” Model told council. “We don’t want to produce and reproduce the Downtown Eastside here.”

I have to agree with Elizabeth Model. We don't want the "Gateway to Surrey" to become another DTES. There is no need to reproduce that failed social experiment any more than we already have. I have been an advocate for the homeless and oppressed all my life. In fact, I carry deep personal guilt over what has become of the Front Room homeless shelter on the Surrey Strip that is plagued with drug dealers and public drug use.

Years ago I addressed Surrey city council as a representative of a nonprofit group I created advocating for the homeless called Respect International. I slammed City council for closing the Front Room on a building technicality. I said I would be creating a website and posting each council member's position on the closure of the shelter on the internet and said this was going to be an election issue. At the time, the thought of closing a homeless shelter in Surrey outraged me. I didn't understand what the real concerns were.

We finally got rid of the Dell Hotel. That has been a blight on Surrey for over 30 years. This is a golden opportunity to transform that area into another business metropolis like Surrey Central. When people drive up the hill from New Westminster we want them to see a shining new development like Metrotown. That will bring money into Surrey which will in turn increase tax revenue and make social programs for the homeless possible.

We cannot address homelessness and alleviate their suffering until we confront the predators that are viciously exploiting them on a daily basis. We cannot help the homeless until we start arresting the crack dealers that are continually brutalizing them as we speak. We need affordable housing and drug treatment centres like Price Pro who teach addicts life skills and help them get off the drugs instead of perpetuating the pharmaceutical scam by turning them into lifelong methadone addicts. If that doesn't change, nothing else will. Maybe we should put the new homeless shelter near Price Pro and not let any drug dealers or needle exchanges in the area.