Texas cops on the take 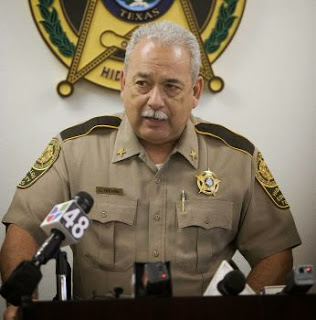 The Borderland Beat is reporting that in Hidalgo County, nine former lawmen were recently sentenced on federal drug charges, much of this involving a police drug unit ripping off drugs and escorting cars carrying drugs. Lupe Treviño, the former Hidalgo County Sheriff was just sentenced to five years for taking money from a drug trafficker.

He plead guilty two weeks after resigning as sheriff. Now we find out that 60 weapons are unaccounted for at the Hidalgo County Sheriff’s Office. Operation Fast and Furious revisited. This wasn't just one dirty cop. This was the sheriff and eight other lawmen. It's also tied to the murder of Julian Pesina, a Balcones Heights police officer with alleged gang ties. 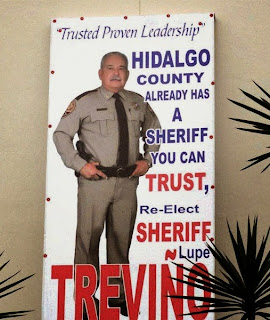 This case is reminiscent of the Mayor and Police Chief of Columbus, New Mexico who were involved with arms trafficking for the Mexican cartel. Chief Vega called the feds after counsellor Blas Gutierrez was pulled over and had several guns confiscated and asked the feds for the guns back. Then a day or two later they bought more guns and had those confiscated as well.

At the time I said that since they were so bold as to ask the feds for the guns back, they must have felt they were operating under a higher authority than the feds I.E. the CIA. People said I was crazy for making that claim but since the story broke about Operation Fast and Furious, that premise isn't very far off.

Posted by Dennis Watson at 6:56 AM