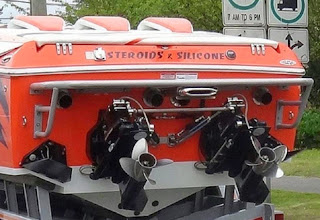 Castanet is reporting that the Gang Task Force are in Kelowna this summer and have issued a warning to gang members that the Kelowna Summer Jam is still in effect. They'll even be on the water to enforce boating safety rules.

Rule number one: Don't drive around like an asshole picking fights with civilians in the name of the Hells Angels with Spike's endorsement boasting about your support for the Bacon Brothers who everyone hates. You'll get your ass shot up pretty fast if you do that again.

Let's take a count of casualties... Randy Naicker (Independent Soldiers was at the Castle fun Park meeting in kevlar before the Surrey Six murder) - Dead. Jonathon Bacon - Dead. Larry Amero - shot with his buddy Jonathon Bacon. Went into exile now in prison waiting trial for two huge drug rings out of Montreal and Australia. James Riach (Independent Soldiers was with Randy Naicker at the Bacon Brother's meeting before the Surrey Six) Shot with Larry Amero and Jonathon Bacon. Went into exile in the Philippines. Now in hiding from the Mexican cartel. Larry Amero's friends sure don't have a very long life expectancy.

So if you see that ridiculous boat Steroids and Silicone on the water this summer stay far away from it before someone blows it out of the water with an rpg. Steroids don't make you bullet proof idiot. The police will be on Pitt Lake as well making it safe to paddle up Widgeon Creek. 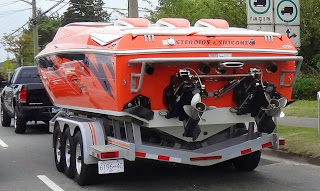