Calgary police believe Nathan O'Brien and his grandparents were murdered 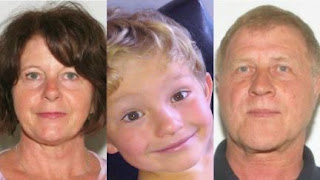 CBC is reporting that the Calgary police believe Nathan O'Brien and his grandparents Alvin and Kathy Liknes were murdered. Police Chief Rick Hanson indicated that police believe the trio of family members are dead even though their bodies have not been found. He said first-degree murder charges will be laid in the deaths of the grandparents, and a second-degree murder charge will be laid in the death of five-year-old Nathan.

CBC is reporting that Douglas Garland - who had previously been named as a person of interest in the disappearance of the three family members - is back in police custody. Previously CBC reported that Alvin Liknes's son is in a common-law relationship with Garland’s sister and that there was some bizarre concerns about a business deal gone bad.

The family is still holding onto hope until the bodies are recovered.