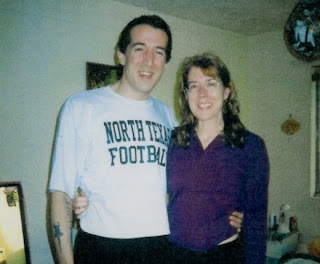 This is a picture of John Nuttall and his mother Maureen Smith. The Vancouver Province is reporting that "Nearly a year after two Surrey residents were arrested and accused of plotting to bomb the Victoria legislature on Canada Day, a pre-trial hearing for the pair opened in Vancouver."

"B.C. Supreme Court Justice Catherine Bruce, who is hearing the submissions, imposed an interim publication ban on reporting details of the arguments by defence and Crown." That is yet another criminal act. The purpose of a court publication ban is to prevent the jury from hearing evidence that was submitted to the court when they were not present. Not to censor the freedom of the press.

We all know that sometimes a mothers love can be blind. Sometimes the mother of a serial killer will say oh my son would never do that. However, in this case the evidence against her son is not only not believable but is actually fraudulent. The Vancouver Province quoted his mother as saying: "Smith said she was “really upset” with police conduct in the case and claimed that officers kept pushing her son to do something bad, but that he had refused to do so."

This is the root of the fraud. Intelligence agents manipulated a vulnerable drug addict and are trying to make it look like they saved the world from a terrorist when that is in reality very far from the truth. We know that the Canada Day bomb plot allegation is a malicious lie. He was originally arrested on March 2nd for knowingly facilitating a terrorist activity. That means their claim they save the world from a Canada Day plot was false.

The Vancouver Province is reporting that "Police allege that the accused took steps to build explosive devices and place them at the legislature, where crowds gathered on Canada Day." This allegation is a bold faced lie. They did not take steps to build explosive devices. Police agents gave them pressure cookers. When the police searched their home, they found food in the pressure cookers. They had no idea how to make bombs out of them. Period. Aside from there being no motive other than police agents trying to convince them to do something illegal, they did not take steps to build any explosives. That is false.

Clearly in this case, John Nuttall's mother has every right to stand by her son. We all should. We need to address the fact that police agents created the plot and provided materials they claim could be used to make explosives even though the suspects had no idea how to make them.

Air India was much worse. A CSIS handler helped plan the horrific event and actually did provide the explosives. CSIS still need to be charged in that case just like this one. When police agents give drug addicts weapons or explosives and pay them to say they will use them, they haven't saved the world from a terrorist, they just created one. This is a misappropriation of tax dollars.

The judge agreed to allow the media to report that accused John Stuart Nuttall and Amanda Korody, who are facing terrorism-related charges, are seeking a remedy for an alleged “abuse of process” on the part of authorities investigating the case. Details of the alleged abuses by authorities, however, remain covered by the ban.

They bloody well should seek remedy for the abuse of process. Unfortunately, they're in a criminal court not a civil court. The remedy they deserve would more likely be awarded by a civil court but it is certainly worth making the argument since their abuse of process is criminal.

Here's the problem. The BC Civil Liberties Union should not of had to spend money on an application to lift the ban when the ban itself is illegal and has no merit. Unless they are being tried by a jury there is no grounds for a publication ban. Obviously names of intelligence agencies' agents are withheld but that's it. Everything else falls under the Freedom of the Press.

Catherine Bruce ... I remember that name. She's the snowflake that threw out all the evidence after the RCMP acquired a search warrant, knocked on the front door to execute the warrant but didn't knock on the back door. From one extreme to the other. The good news is that she just might have the fortitude to break the cover up of police misconduct in this case. Only in this case it's not police misconduct it's CSIS misconduct just like Air India was.

Without naming police agents we need to name the intelligence agencies involved in this entrapment scandal. We know CSIS was the ones that "tipped off" the RCMP but the accused's lawyer said the disclosure stated US Intelligence agents were involved. We need to name the US agencies involved and clearly define their culpability in this criminal act.