Gino and the Associate 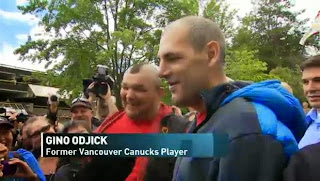 A blog reader had mentioned how they noticed a video of Gino Odjick with a Hells Angels associate on Global but I couldn't find the video at the time. Another blog reader sent it in along with some screen clips and I can see what they are talking about. I was hesitant saying anything about it because Gino is so well liked and the Hells Angels aren't. Especially a two bit associate. 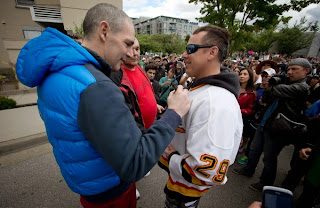 This is the guy that was at the Hells Angels anniversary party in Whiterock. It's Rob Yews who was on Season 3 episode 11 of the The liquidator. Somewhat ironic how the guy on the liquidator kept asking him if the stuff he was selling was stolen. Very perceptive indeed. Rob Yews ran a "clothing" store in Yellowknife the same time another Hells Angels drug ring was busted there. 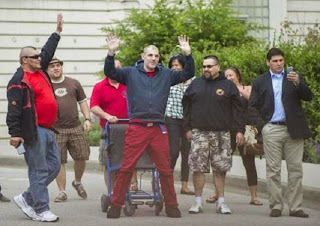 It's sad because the Hells Angels are so hated now that people understand what they're really about. We all know about Odis Garrett, Greg Domey and Kerry Ryan Renaud. Not to mention the Haney sleaze and the association with the Pickton Farm. No one likes a liar, drug dealer or anyone who runs a stolen car ring. Exploiting the homeless is nothing to smile about.