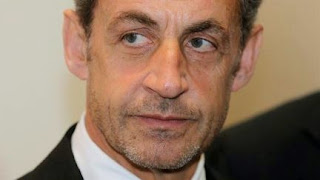 Sarkozy was detained Tuesday and reportedly questioned by financial investigators in yet another corruption probe. Detained sounds pretty close to being arrested but it does have the stench of political opportunism. There's no way I think Sarkozy should run again any more than Rob Ford should. The Right need to pick another candidate. The Right supports the Left when they pick such corrupt idiots to represent them.

France has always had a history of being passionate supporters of freedom. The French Revolution was based on the principles of Liberty, Equality and Fraternity. The French were the ones that gave the Statue of Liberty to the Americans. Yet what's happening in France is a similar political problem that's happening around the globe.

First there's the obvious concern about political opportunism which goes both ways. One side wants to exploit the fact that there's more dirt on Sarkozy while Sarkozy was working hard to create dirt on his rival candidate. Looking beyond the opportunism, I really think we need to shun extremism. Here we have the right wing candidate that turns out to be a dirty dog, so they go and elect a socialist. That's extremism.

So if we set aside the opportunism and the extremism there are two acts Sarkozy did that we need to remember because they are important. One was Libya the other was Pakistan. Libya was obvious. Sarkozy was trying to convince the world we should trust Gadaffi with nuclear power. It's pretty obvious that he did receive campaign contributions from Gadaffi despite his denial. He was trying to sell Gadaffi a French reactor. As soon as Gadaffi decided to buy a reactor from somewhere else, Sarkozy lead the invasion trying to topple that "dictator."

As Canadians we need to remember that because we supported that tainted mission. A Canadian General was the poster boy that ran interference for Sarkozy's dirty deed. All this talk about Sarkozy accepting campaign contributions from a rich widow is smoke and mirrors. I don't care who that dirty dog slept with. The fact that he accepted campaign contributions from Gadaffi before he murdered him is totally within the realm of believability.

The other thing we need to remember is Sarkozy's involvement with the Karachi affair in Pakistan. That scandal dates back to 1994 when Sarkozy was budget minister in a government led by his ally and mentor, Prime Minister Édouard Balladur. The Balladur government sealed a deal to sell three Agosta 90 submarines to Pakistan for an estimated $950m. To secure the contract large bribes were allegedly paid to Pakistani politicians and military, as well as commissions to middlemen.

The key issue is whether around €2m of illegal kickbacks from the sale were secretly funneled back to France to fund Balladur's unsuccessful 1995 presidential campaign. As budget minister, Sarkozy would have authorized the financial elements of the submarine sale. At the time he was also treasurer and spokesman for Balladur's campaign.

The initial claim was that France was supposed to pay kickbacks and commissions to Pakistan for the submarines but failed to do so. As a result, “terrorists” bombed French engineers. The pivotal point is that Sarkozy set up a shell company so some of the kickbacks would be funneled back to him. He had his best man carry the cash. So he is the one that would be upset the kickbacks didn’t happen. I’m not saying he bombed the French engineers and blamed it on terrorists but I am saying he had a motive to do so and that is the root of the allegations.

Sarkozy's involvement with the Karachi affair in Pakistan isn't just about Sarkozy getting kickbacks from an arms deal. It's about Sarkozy being involved with murder under the guise of a terrorist act when those kickbacks were stopped. That is what we need to remember.