Stop the violence in Gaza 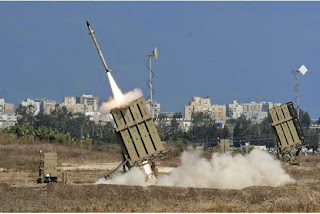 The escalation of violence in Gaza is a colossal concern for anyone with a conscience. Israel has every right to defend itself. That does not include the right to brutalize civilians. In 2009 the extreme violence was equally absurd. Israel pulled out of Gaza to let them have autonomy and then Gaza starts firing rockets indiscriminately into Israel. Equally bizarre was Israel's over reacting by using American shells of white phosphorous on Gaza.

This time, someone kidnapped and murdered 3 Jewish teenagers from the West Bank. That was a horrific act. Yet West Bank is a Palestinian area. Zionism does not mean evicting Palestinians from their homes and moving in on their rubble. Zionism means living in peace with Palestinians like in the Oasis of Peace. Israel's Iron Dome defense system against rocket attacks is totally appropriate. Canada should invest in similar technology.

Back in the day, when Syria kept firing rockets into Israel from the Golan Heights, Israel simply took the Golan heights. Problem solved. That was a natural consequence to unacceptable behavior. The problem is that the Palestinians from Gaza aren't from Syria, Lebanon, Jordon or Egypt. However, they aren't from Gaza either. The original inhabitants of Gaza weren't Palestinians or Jews it was the Philistines. They were conquered and carried away by Egypt. So this whole erroneous claim to original land title is a farce.

Gaza has a history of not only disrespecting all human life from all religious backgrounds but of being absolutely insane. In the last conflict, Israel would give a warning before they hit a Hamas target where they were firing rockets into Israel from. As soon as they did that, crazed women would scream like lunatics and run to the place to die as martyrs to increase civilian casualties. What kind of people would use civilians as human shields to gain public support for their cause?

Years ago I loved visiting Egypt. All the ancient archeological sites to me seemed holy. Personally I'd love to visit Jordon or Saudi Arabia. Not Gaza. I don't like to visit people who don't have respect of human life or for archeological holy sites. The old city of Jerusalem is divided into four quarters and is shared by the Muslims, the Jews, the Christians and the Armenians. Jerusalem is filled with holy sites sacred to each religion. When Gaza fires rockets indiscriminately at Jerusalem, they are disrespecting the human life from each religion as well as all their respective holy sites.

Hitting a Mosque is not good. Ground troops move in.