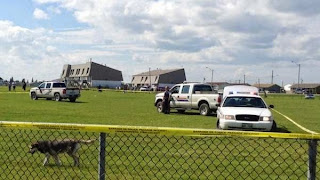 West Coast Native News is reporting that the RCMP shot an unarmed man at the Norway Cree First Nation Children’s Baseball Game in Manitoba on Sunday afternoon in front of 200 witnesses including children. CBC reported that witnesses told CBC News the man, Evan Cromarty, who suffered non-life-threatening injuries, appeared to be unarmed and was holding his arms up when a Mountie shot at him. “There's a hundred maybe 200 people out here," he said. "And everybody saw that — not just me. A whole bunch of us saw that and the kids were traumatized."

Witness Annie Ettawacappow told the Winnipeg Free Press "I was outside my house. I was watching and he was running toward the field... " She said she saw two RCMP cruisers arrive and two officers come out with their weapons drawn. "A cop pointed a gun at him," she said. "I saw him put up his hands." The police told him to "freeze," she said. Ettawacappow said Cromarty kept his hands up and was walking backwards. "He was walking away with his hands up."

She said only one of the officers fired his weapon and she heard four shots. "He went down and fell to the ground. He started twitching," Ettawacappow said, adding she doesn't think Cromarty was armed, which Evans echoed. "He had no weapons on him," Evans said. "I thought he was dead," she said.

The Winnipeg Free Press reported that there were two games at the Rossville Diamond Sunday. One involved 12-year-olds and the other 17-year-olds. Sounds like he didn't obey their direct command at the snap of their finger again. Sounds like more RCMP officers need some time with Doctor Phil to prevent these outrageous actions.