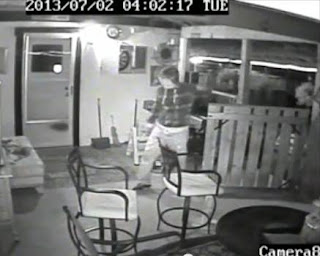 On the front page of yesterday's Vancouver Province was the headline that read Chilliwack Street under siege. Inside the paper the article read Petty crimes plaguing neighborhood. The article talked about all the spin off crime that was terrorizing one neighborhood all related to the public sale of drugs.

The root of the problem is that the Chilliwack neighbourhood is plagued by drug deals, prostitution, thefts. So once again we see a huge spike in property theft in an area where drugs are sold in public. This is the exact same problem the Aldergrove judicial review board had with prolific offenders like Jamie Pool committing an absurd amount of property theft and not being faced with any consequences whatsoever.

Their conclusions was that judges are the problem. The more crimes these prolific offenders commit, the less time they serve in jail. The Chilliwack article spoke with residents who said the couple lives close to a public swimming pool with a big parking lot that attracts drug dealers and prostitutes during the night.

Both the Iezzis and Walker said they feel frustrated with the RCMP response, though they don't blame individual officers. Instead, they point to a system that's overburdened with complaints about petty crime and a court system that makes it almost impossible to prosecute the perpetrators. "As perpetual victims of petty crime, we're left feeling abandoned," said Nicole Iezzi.

The problem is drug dealers which attracts drug addicted prostitution and a whole range of property theft. Chasing the prolific offenders around is like putting a finger in the dyke. The real problem is the crack dealers. They are the pimps that brutalize and exploit the sex trade workers for drug debts. We've got to stop kicking the cat and addressing the real problem by arresting the crack dealers. That is the New York Model.

So there we have it. The problem has been revealed and the pattern is repeating itself like a broken record. They say insanity is doing the same thing over and over again expecting a different result. When we look at what's happening the the DTES as well as in Whalley, Newton and now Chilliwack not arresting the crack dealers clearly is the epitome of insanity.

The article talks about how the neighbors have started to take matters into their own hands and how the police are waring about vigilantism. One resident has started posting surveillance videos of the prolific offenders that are stealing their stuff but remain on the street. Quite similar to the crookstube a Surrey resident started during their spike in property theft. 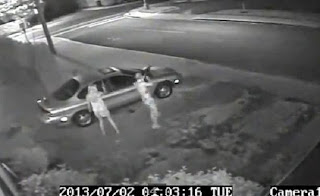 One resident talked about how they shot one intruder with a paintball gun. That's a Surrey trick. In Surrey they'd freeze the paintballs before shooting the crackheads. Although people have a right to defend their persons and property, this is confronting the symptom not the solution. The solution is arresting the crack dealers selling the drugs. When the police don't do that it makes their claim that public safety is their number one concern a bold faced lie.

Again it's not individual officers that is the problem here it is the departments mandate or should I say lack thereof. This reoccurring problem is the root of the conflict. Nevertheless, ya gotta love the video of the guys in a pick up truck giving one prolific offender a beat down. I guess in Chilliwack it's alright to be a redneck still.