THC vs CBD - Fact vs Fiction 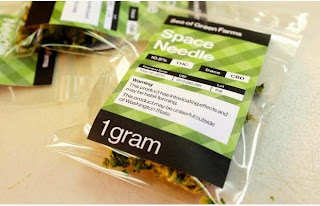 Last week the Vancouver Province ran a front page article about the new legal pot stores opening up in Washington. The first thought that came to mind was disappointment. I agree no one should go to jail for pot but I am very concerned about the change in social perception of pot use and abuse. BC bud is much more powerful than homegrown was 30 years ago. On top of that people are smoking it much more often - every day and often several times a day. That is excessive.

Part of the obsession is the twisted claims of the medicinal uses of pot. Anything that gets you baked, stoned or wasted, isn't good for you. This huge misconception that "pot cures cancer" is perpetuating the false belief that pot smoke isn't bad for you when in reality it's worse than cigarette smoke. All smoke is bad for you. That's why the leading cause of death in house fires is smoke inhalation.

So my first thought that comes to mind when I see all the pot heads lining up for miles to buy legal pot is disappointment. The pot obsessiveness is in my opinion no different than soma in Brave New World. The drug that tranquilized the masses to appease them into letting the state remove their civil liberty. Smoking pot every day is excessive. Smoking pot while driving or when you're pregnant is irresponsible.

California was the first state to legalize prescriptions for medicinal marijuana. Yet they voted no in the referendum to outright legalize pot. Clearly just because Washington and Colorado said yes doesn't mean we have to. California said no for good reason.

CBD is something that's in pot that actually does have medicinal properties. It supposedly helps with seizures. Cannabidiol is a non-psychoactive oil made from marijuana plants. Oil that is high in CBD but low in THC does appear to help treat epilepsy. However, this type of pot, just like hemp, won't get you stoned because it's low in THC.

The package in the top picture states the THC content is 10.8% while it only has a trace amount if CBD. That means it's recreational pot not medicinal. The purpose of smoking that pot is to get you stoned. "Cannabidiol (CBD) is a compound in cannabis that has medical effects but does not make people feel 'stoned' and can actually counter the psychoactive effects of THC. After decades in which only high-THC Cannabis was available, CBD-rich strains are now being grown by and for medical users." Projecy CBD

This is where we separate fact from fiction in the get stoned vs get healthy medical debate. 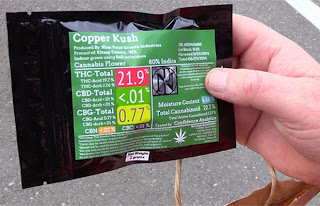