Reflecting on the violence in Gaza and the Ukraine 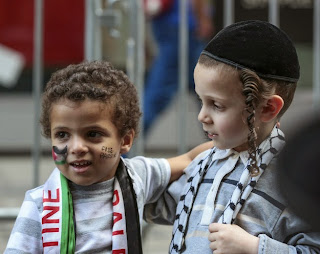 It's hard to watch the violence in Gaza and the Ukraine on the news and not be moved. It's sad and discouraging. World peace seems like a pipe dream as we watch how the old law of an eye for an eye leaves everyone blind. In more ways than one. The violence in Gaza concerns me deeply because it is an example of the extremism we often face in the world.

Religion isn't the problem since religion teaches vex not the stranger that sojourneth with thee. The problem is hypocrisy and the lack of real religion or more accurately the lack of humanity. When humanity is replaced with brutality, everyone is diminished. Hamas indiscriminately firing rockets into Israel is wrong. So is Israel's brutalization of Gaza. They are both wrong.

In the previous conflict, Israel used white phosphorous in Gaza. That was insane. In the previous conflict, Israel would issue a warning where it was going to strike to disable a Hamas rocket launching location and Palestinian women would run to the site to increase civilian casualties to increase world outrage. That was insane.

In this conflict ground troops have invaded and the borders are closed to prevent more rockets from being smuggled in. The civilians have no place to go. There was one tragic scene in Gaza how a man was returning with aid workers to his home which had been destroyed by shelling. He was shot dead by a sniper. That heartless act was cruel, brutal and unnecessary.

The number of children in Gaza that are being killed every hour in Gaza is a colossal concern. That kind of brutality is morally wrong. That kind of heartlessness disassociates us from what humanity really is. To ere is human to forgive is divine. Forgiveness is a distant dream right now. Right now we need to stop the violence. That would be godly.

When discussing the recent conflict a friend said it's hard to believe the Jews are the "chosen" people by the way they are acting. I said I don't like the term chosen. I think that is a translation error. Historically the Jews were known as the covenant people. In the tabernacle in the wilderness Moses brought the children of Israel into the bond of the covenant. Israel promised to serve God while God promised to help them and stated that through them all the nations of the earth would be blessed. Leviticus was a harsh reminder of the blessings and cursing of obedience.

Indeed, when looking at the brutality in Gaza it's hard to think the Jews are keeping that covenant. There's group called JAG - Jews Against Genocide. They have been holding a protest against the violence by placing mounds of children's dolls around the world. Outside Israel’s holocaust memorial museum they set the dolls on fire. This is a powerful image and reminds us of the humanity we aspire to. That is godly.

There's another group called Jews against Zionism and I don't like the term. Zionism isn't bad. Evicting Palestinians from their home isn't Zionism. The term Jews Against Genocide is a more graphic visual image and is something everyone can agree with.

I don't share the same hate of Israel that many foster. Referring to them as Israeli scum and promoting hate to justify another holocaust is not something I support. Yet clearly Israel is not always right. They wouldn't have been carried away captive in Babylon if they were always right. God, like Abraham Lincoln supports them when they are right and parts with them when they are wrong the same as he does for everyone else because God is not a respecter of persons. In every nation he that feareth him, and worketh righteousness, is accepted with him.

Martin Luther King had a Dream. He had a dream that one day a man would,be judged by the content of his character not by the colour of his skin. He had a dream that one day black children and white children along with Jews and Gentiles would join hands and sing the hymn free at last, free at last, thank God almighty we are free at last. The top picture was taken of two children who met at a protest in Times Square in New York on July 17, 2014. Martin Luther king's dream has become a reality in my community. I hope it does in yours as well. 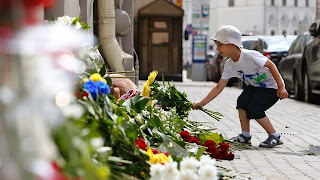 On both sides, terror and confusion