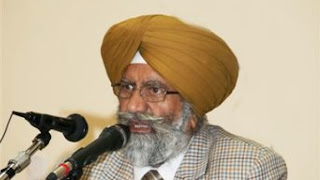 The Link is reporting that Baldev Singh Kalsi, 66, leader of the Gurdwara Sahib Brookside, was taken into police custody after his wife, Narinder Kaur Kalsi, was found in severe medical distress at their home in South Surrey a wek ago last Sunday. Now she has died in the hospital and he has been charged with second degree murder.

He has since been kicked out of his position as Temple president and was beaten up in prison. It's not surprising since everyone hates a woman beater. My question is this: why is it bad when a brown guy beats a woman but it's OK when white gang bangers or members of the Hells Angles do? The answer is simple. It's not. Yet there's a long list of white gang bangers that have beaten their wives. Do we ostracize them as well? We should.

Donnie McWhirter, Don Lyons, Dave Revel and the ex husband of Kerri Krysko join Baldev Singh Kalsi in the wife beater trash list. "What we do in life echos in eternity." Gladiator