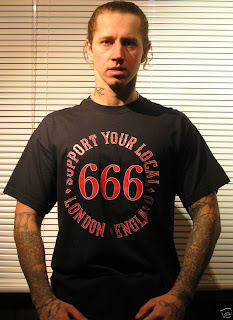 Take a good look people. This is what an idiot looks like. A grown man wearing a T-Shirt that says 666. Well a small grown man. Come on kids, this isn't High School. That really looks dumb. That's like wearing a shirt that says I love Charles Manson or I love Adolf Hitler.

Just ask Mick Jager, there's too much sympathy for the devil. This Big Red Machine support gear is now available on E-bay. I thought it was a joke. They've shortened the term Support the Big Red Machine to Support your local 666. The London chapter call themselves Hells Angels MC London 666 England. I don't know which is worse, a grown man wearing a teenagers 666 shirt or a grown man wearing a clown Jesters logo. Are those support shirts made out of Kevlar?

It's way worse than a punk rocker in Trafalgar square. Punk rockers are nonconformists not Satanists. Somehow I don't think that's anything any of the noble blood spilt on the beaches of Normandy would support. I think that's what they fought against.

I've talked about Bob Green and 666 Holdings. Now I hear Bob Green has 666 tattooed on his hand or wrist. That is weird. It certainly isn't hard core. It's just dumb, dumb, dumb:

Yo Brixton, don't be buying any of that shit from those dumb hyphies. They're worse than the Bill. They're Nazis who get rich off exploiting the poor. Keep the faith. The herbs of the Caribbean. That scar face shit is whacked.