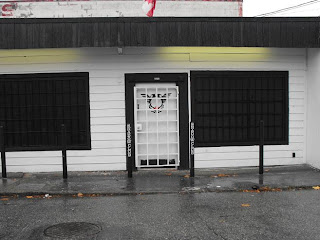 Looks like they changed the name of the Outcasts clubhouse around the corner from Gus' in Surrey. Now they just call it Shadow Club for short. Like that's not obvious. 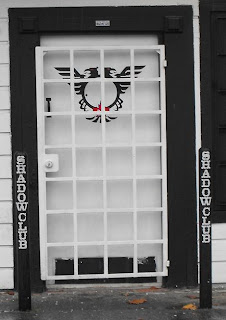 Back in 2006 Kim Bolan reported on the Outcasts in the same building: http://www.canada.com/vancouversun/story.html?id=5a89ce62-1cb9-40a6-88c5-34acb71cfec6&k=73400
The guy who answered the door said their being connected to the Hells Angels was a bunch of lies but he was wearing a Hells Angels support shirt and hat when he said it. Kind of makes what he said difficult to believe.
So now they just call it Shadow Club for short. At least that's a bit more honest. It is a better logo that the Clown Jesters. I still don't understand how they are allowed to operate a shadow club for a criminal organization in Surrey. Especially right around the corner from Gus' Shop. Everyone knows about Gus' affiliation.
I guess I'm just slow. The Vancouver Sun reported on this the same time they reported on the Jesters: http://www.vancouversun.com/news/Puppet+biker+clubs+tied+Hells+Angels+have+cops+worried/2026311/story.html
BTW The Shadow Club is on Google Street view too. Just look under Bentely Road in Surrey. You can see Gus' Shop in the background. They share the same parking lot.
. Posted by Dennis Watson at 2:04 PM