Putin and Hollande team up against ISIS in Syria 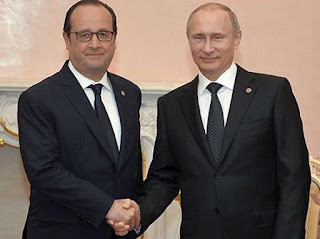 There has been a bizarre series of events in France and in the world that has resulted in the alliance of the new French President with Vladimir Putin to defeat ISIS in Syria. It is somewhat suspect. I personally do not believe it has anything to do with ISIS and everything to do with supporting the Assad regime and making money from future arms dealing in Syria. Let's look at the past history and see how that relates to recent events.

Recently a Russian fighter jet was shot down over or near Turkish Airspace. Turkey said the jet entered it's airspace, Russia said it did not. Both claims are believable. The fact that the pilots of the jet that ejected from the plane before it crashed landed in Syria supports Russia's claim they were near Turkey in Syria. There are more than two groups of people in Syria.

The pilots landed in an area controlled by Syrians of Turkish descent who oppose the Assad regime. They even shot one of the pilots dead as he parachuted to the ground. Normally that is considered a war crime. I'm not sure who made that rule up. If an enemy invades my country and is parachuting to the ground with a gun having the intent to kill my fellow countrymen, I'm not sure why they say he has to touch the ground before I can shoot him. It doesn't really make sense. However, shooting an unarmed pilot as he parachutes to the ground after escaping a crash is an entirely different matter. It's totally in bad taste.

Russia was understandably upset and detailed some Turkish diplomats in Russia. Turkey warned Russia and said they better not play with fire. What the hell did Turkey expect? Shoot down a Russian jet and sill be on good terms? That is somewhat bizarre. Nevertheless, the underlining question is, why did Turkey shoot down a Russian jet if they are both trying to defeat ISIS?

A coworker of mine said the answer is simple. Everything Russia does is suspect. They aren't just bombing ISIS, they are also bombing the rebels opposing the Assad regime. That's when the light went on. That is believable. Russia has in the past bombed rebels opposing the Assad regime and called the terrorists. Consequently France cautioned them to stick to bombing ISIS and not the rebels. So why the change of heart? Why has France warmed up to the Assad regime and has teamed up with Russia? Money perhaps? Money from future arms deals.

Russia has always sold Syria MIG fighter jets. France has always sold arms to Libya and many other countries that perhaps the West would not. As in the movie Lord of War, it's all about the money. I will also popint out, although it is not entirely relevant, that François Hollande is a socialist just like Gaddafi was. Not that there's anything wrong with that. I'm just sayin.

France went from one extreme to the other. They went from a right wing politician who was a complete dirty dog to a left wing socialist. That is, in my opinion, a bit extreme. Personally, I view politics very simply. Draw a line in the sand and call that democracy. The further you get away from that line on the left or the right the further away from democracy you go and the closer to dictatorship you get. It is somewhat ironic that in 2015 François Hollande compared the neo-fascist National Front (FN) to the Stalinist French Communist Party (PCF). As much as those two groups of extremists hate each other, they both end up in the same place.

Which brings us to CBC's recent news article about how France's National Front leader calls Canada's refugee plan madness. Why would any main stream media outlet even quote anything the National Front has to recommend? They are anti Semitic fascist neo Nazis. CSIS created the National Front in Canada to "track" extremists. There appears to be a lot of hate and extremism being thrown around in the world today. You would think in our age of technological advancements, any civilized society would be far beyond all that nonsense.

The Syrian refuges coming to Canada are mostly women and children fleeing a war torn country. This absurd hatred and racism against them is heartless and inhumane. Syria is at civil war between the Assad regime and the rebels. ISIS is a smoke and mirrors creation of the intelligence community. NATO is doing the same thing Russia is. They are using their creation of ISIS to rationalize supporting the rebels against the Assad regime.

Trudeau was right for stopping Canada's involvement in the bombing because both sides are lying. Every time we support one side in that kind of conflict, the rebels we supported turn out to be worse then the dictator they were opposing. We can provide for the common defense but we need to let nature take it's course in some of those conflicts because our involvement has displaced and adversely effected a huge number of civilians.