I've seen too much hate to want to hate

CKNW is reporting that "Prime Minister Justin Trudeau is responding to what he calls acts of hatred and racism directed at specific Canadians, in the aftermath of terrorist attacks in Paris. In a statement, the Prime Minister says diversity is Canada’s strength and that vicious and senseless acts of intolerance have no place in our country, and run contrary to Canadian values.” I have to agree. Hamilton's response is what Canada is all about. It's what the French Revolution was all about. As Martin Luther King once said "I've seen too much hate to want to hate, myself, and every time I see it I say to myself hate is too great a burden to bear." Indeed it is.

A blog reader recently asked me how I was enjoying semi retirement. I had to smile. If only. They were obviously referring to the blog. I have stopped blogging about the gang war but I'm still here. I have changed directions. Everyone knows the Hells Angels are a criminal organization that sells drugs. The recent raid in Quebec everyone is talking about confirms that.

Mom Boucher and his daughter have been charged with conspiracy to commit murder along with his old drug dealing pal Greg Woolley. I'm not going to get into the whole soap opera of who betrayed who this time. The Montreal Gazette did a great overview of that. It's pretty obvious that Mom Boucher is not out in bad standing. That was a false rumor sent out to get early parole. Boucher got his patch after serving time in prison for armed rape and no one cares. He was involved in the Death Riders betrayal along with Biff Hammel and no one cares.

He's still involved with Greg Woolley and the current drug related violence in Montreal and no one cares. Except for the Quebec police of course. Another blog reader pointed out that BC is way more corrupt then Quebec is. The police in Quebec are aggressively trying to deal with the problem. Not in BC. In BC we have yet another Pat Fogherty running interference for the Hells Angels in the media. Like I said before, Every time a police task force found organized crime, a government body disbanded that police task force.

In Quebec, they have an anti corruption task force investigating organized crime in politics. Not in BC. Ontario has anti SLAP legislation. Not in BC. BC is a cesspool of corruption and no one cares. The courts in BC are a joke. Ron Skolrood is a man like unto Peter Leask. He's taking us in the wrong direction. That's all there is to it. I'm still posting new links on the old web site at www.gangstersout.com but there's nothing else really for me to say. Except for the fact that there was another shooting in Surrey Saturday morning. Over all things have calmed down recently. 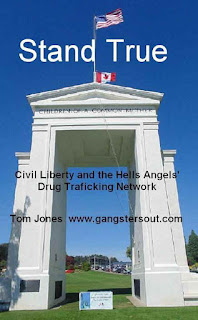 Canada Post is still lyng to the media. Nothing has changed there either. CBC is reporting that "After making a profit in the second quarter of the year, Canada Post has reported a loss of $13 million in the third quarter." Despite the fact that "In the third quarter, parcel volumes rose 10.4 per cent as revenue from parcels rose by $43 million to $380 million. The fourth quarter, with the crucial holiday season, is likely to be the most profitable period for parcel delivery."

Canada Post is manipulating the numbers again trying to make Justin Trudeau look bad for keeping his campaign promise to scrap Canada Post's insistence on doing away with door to door delivery for everyone. Time for a new CEO. They recently made a huge expenditure on new sorting machines that sort the route to line of travel. This expense will be off set by the fact that the time Letter Carriers spend inside sorting the mail will be drastically reduced and almost all of their time will be spend outside delivering mail. This makes for much longer routes and is eliminating a huge number of positions which will save money and increase profit.

There is no need to take away door to door delivery from everyone. Canada Post is a cash cow that consistently makes a profit and consistently pays dividends to the government. If they privatize Canada Post, they will have to raise taxes to off set the loss in tax revenue.