The movie Creed hits the theaters 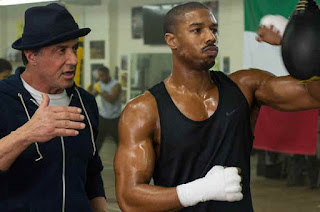 We saw the movie Creed last night. My daughter was never into the Rocky movies. They were before her time. This time she saw a commercial on TV and said a hot young black guy? I'd like to see that. It is a masterpiece. Stalone has always made tasteful Rocky movies that have been positive and motivational. Rocky has heart. He is humble and hard. Arrogance is irritating. As they say in Rome, pride cometh before the fall. Rocky has good advice for life. In the trailer for this movie Apollo Creed's son says I once heard a man say it's not how hard you can hit in life, it's how hard you can get hit and keep moving forward. That was the motto in the last Rocky movie.

In his last movie, Rocky Balboa, the young guy says to him in the preliminary, It's over. Rocky just looks at him and said yo it ain't over until it's over. The young kid gets irritated and says where's that from the /80's? Rocky thinks for a minute and says embarrassed, naw I think that's from the /70's. He looks at his son and his son smiles. By the end of the fight the young kid says you are one crazy old man to which Rocky responds Don't worry, you'll get there. The sands of time affect all of us. When push comes to shove we have to ask ourselves what will our legacy be?

In this movie Rocky even mentions Vancouver. Young Creed sees a picture of Rocky and his son and asks him if he trained his son to box. Naw he said, my son wasn't into that. He's a real good kid though. Smart. Has a good career. He moved away to a place called Vancouver. I had heard Stalone likes it here. Go figure. He's certainly welcome here. I think they filmed part of Rambo First Blood out near Hope.

The young Creed in this movie reminds me of a young Latino friend I trained many years ago. He was young, strong, talented and had a lot of anger. The gangs wanted him big time and he got into some trouble. Twice. Did some hard time in the US. Got into a lot of fights in prison. By the time he finally got out he had faced his anger and really got it together. Now he is the man I always knew he could be. I'm proud of him. He is family. He moved down to San Fran to be near his uncle who used to live with me when he was young. I promised I'd ride down to visit him this summer.

As Vin Deisel said in Fast and Furious, I don't have friends, I have family. How can we not talk about family when family is all we got? He also said, didn't anyone tell you never threaten a man's family? That's not a very smart thing to do. So I'm still here. In the new Terminator remix one of the characters takes a look and Schwarzenegger and says, he looks old. I've never seen an old terminator before. They explain that the machinery doesn't age but the flesh covering the machinery does. Schwarzenegger then says I am old but not obsolete. Indeed. It ain't over yet.

At the end of the movie Creed last night my daughter looks at me and asks is my make up OK? I squint and say yeah why do you see someone you know? No she said. I was crying in the movie. I look at her a little shocked. She was embarrassed and said it was sad. I similed. It was good.