Lethal Injection sites are not safe 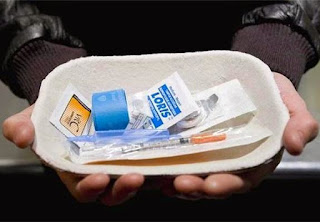 One for the road. The Vancouver Province is reporting that the Vancouver Police Department is asking the public for ideas as it sets its strategic goals for the rest of the decade. “We need input from our community on our priorities, goals and what your police department should be focusing on for the next five years,” Chief Constable Adam Palmer said on Tuesday. What a novel idea. The police are asking the public how they want their tax dollars spent. One step forward. Then the corupt extremists jump on the band wagon calling for an end to the ban on lethal injection sites. Two steps back. Clearly we need a balance between the extremes

Prior to the last election the Vancouver Police Department were in a slight conflict with the Harper government over policing prioritization. With all the lobbying for the legalization of marijuana, the VPD stop cracking down on pot stores so it could focuses on more violent crime. The Harper government didn't like that and sent in the RCMP to enforce their mandatory minimum sentences for possession of pot. From one extreme to the other. It is clear that way too many people here smoke way too much pot. Yet throwing everyone in jail for smoking pot is insane. It prevents us from being bale to confront hard drugs and the violent crime associated with them.

Earlier this year we heard how the methadone program has become a sea of corruption. That pharmaceutical scam ripping off tax dollars has become big business that ties into the pharmacists and the doctors making the prescriptions. The doctors don't reduce the dosages. They turn people into methadone addicts for life all paid with tax dollars. Insite is part of that scam. The Vancouver Province article claimed Vancouver's top doctor is calling for an end to the ban on lethal injection sites. That is obscene. Fire him. He is part of the scam. Ask Dr. Colin Mangham who is an expert in the field of prevention and has worked in the field since 1979. He was fired for telling the truth and speaking out against Insite because he was not part of the scam that ties into the corupt recovery houses that are merely flop houses that exploit the methadone program while addicts stay high and get no treatment. There is an excellent recovery program in Surrey that can't get government funding because it helps get addicts off drugs instead of turning them into methadone addicts for life. I kid you not. Addicts need more than a clean needle.

The Insite scam even went so far as to giving addicts heroin at tax payers expense. The Harper government got a lot of things wrong over the years but opposing the use of tax dollars to buy heroin for drug addicts is one thing they got right. If we are going to move forward as a nation, we need to confront the medical and pharmaceutical scam burning tax dollars and promoting the violence and exploitation of addiction. Handing out free crack pipes is not the New York model. It is social irresponsibility that condones the murder of Janice Shore and Ashely Machiskinic.

So if we want to talk about policing prioritization in Vancouver let's set aside pot and focus in on crack and crystal meth. If we arrest everyone selling crack outside the lethal injection site at Main and Hastings we will see an instant transformation in the violence and exploitation we are currently enabling and promoting there.