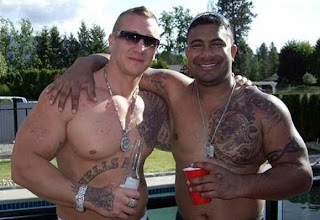 Speaking of the Independent Soldiers, let's take another look at that famous photo of Larry Amero and Randy Naicker that made the front page of the Vancouver Sun. Take at look at the expression on Randy's face. He looks like a kid getting his photo with his favorite hockey player while he wears the teams jersey.
Look at his tattoo. He claims it isn't a gang tattoo, it's just a patented logo for a clothing line. But doesn't that logo look like another famous logo? It's a skull similar to the Hells Angels dead head with the words Independent Soldiers. It looks just like Larry's tattoo. Don't you hate it when a guy copies another guy's tattoo?
There were several comments about the photo. Like "Find a room", "They should be kissing" and "They look like they should be on the cover of the Georgia Straight for a gay add." Look at Randy's hand. He sure looks like he's grabbing a feel of Larry's Delts and upper Pecs and it sure does look like he's getting aroused. Maybe they just put some GHB in his drink to help with the brainwashing.
With all this talk about puppets and puppet clubs, it clearly seems to be what the Hells Angels look for. Clearly the new Independent Soldiers are not independent. Even the police claim they are a puppet group for the Hells Angels.
.
Larry's kind of young. Not a teenager but younger than I had imagined. I wonder if he's a patch over. He's well built but it's doubtful he hasn't done roids. The East Van Hells Angels were caught with roids. Larry seems almost like a nice guy but I wonder if he pays child support on his under the table income or just his taxable income and I'm very concerned with his bacon connections. That just smells bad.
.
Now let's compare idealistic Randy with Mike the hammer Hamersley. His tattoo is nice. It's tasteful, looks good and caries with it a certain amount of originality. Now don't go and get a tattoo just like his. You'd be biting his shit and nobody likes a copycat. Mike seems different. He seems self confident. Smaller guys like Napoleon Dynamite gravitate to him for protection.
. 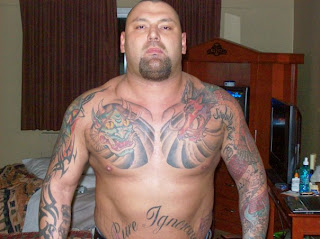