PM has new love for socialists 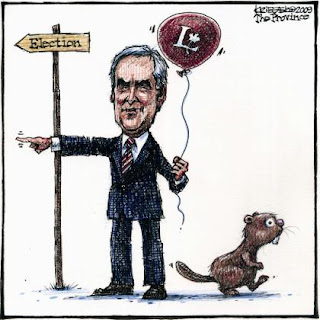 http://news.ca.msn.com/top-stories/cbc-article.aspx?cp-documentid=21692597 Sounds like sour grapes to me. Ignatiaeff is whining and name calling again. One minute he's complaining that Harper is inflexible unwilling to compromise and listen to any of the other parties in a minority government. Now he's complaining that Harper is listening to the other parties. He's just not listening to him.

Ignatieff had his chance. Dion was ready to lead the coalition. Ignatieff parades in and said no. He decided to form a coalition with Harper instead. Then he starts name calling and announces he's ready to call an election. But he also says he's not willing to form a coalition. How does that make him different from what he claims Harper is? http://ignatieff.me/ 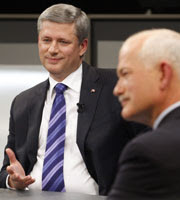 I trust Justin Trudeau a lot more than I trust Ignatieff. Pierre Trudeau and Chretchien were nice guys but we need to remember that justice was eroded out of our judicial system from years of Liberal faint hope. Rehabilitation is a good thing but injustice is not. Five years for murder and house arrest for trafficking cocaine for the Hells Angels is offensive. We need to restore justice to the judicial system.

Here's a link from a blog reader. It's more attack adds on Iggy except it appears to be coming from the left. It appears our Igmhotep is being squeezed from both sides. I must admit his blind devotion to torture is somewhat of a real concern: www.youtube.com/watch?v=_uFbREDNfvE