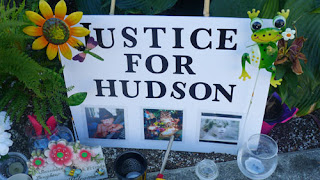 Finally the Hudson Brooks story is making it's way into the main stream media. Front page of today's Vancouver Province. The headline reads: "Devastated mom demands justice in police shooting death of 20-year-old Hudson Brooks in South Surrey. Jennifer Brooks vehemently disputes the claim that her son was suicidal, calling it completely untrue and a false accusation.” In fact a witness confirms it.

The Vancouver Province explains: "According to the police, a call for service was received shortly before 2:30 a.m. regarding a man who was suicidal, screaming and in significant distress in the 1800-block 152nd Street. Officers who were in the detachment responded, located Hudson Brooks, a struggle ensued and shots were fired. Hudson was shot multiple times and did not survive. An officer sustained a non-life-threatening gunshot wound and was treated and released from hospital the same day. The only physical evidence recovered from the scene was police-issued equipment."

Imagine that. A police officer was shot, the suspect was shot dead and the only guns they found were issued by the police. Do the math. As I explained previously, this case was a tragic accident that has been completely covered up. More power to his mother to find answers on the record. That's not going to happen because of the legal liability that would incur. Perhaps the only way the truth will come out is in a wrongful death suit. The mother at least needs to file a Freedom of Information Act request for documents in the police report.

Hudson was a skateboarder leaving Bakerview park at 2:00 AM. The same park that was a known hang out for youth where Dario Bartoli was assaulted and murdered last December. A witness woke up to sounds of Hudson screaming hysterically "Help me they're trying to kill me" as he was running away from the park towards the cop shop. The witness saw him running and was going to get dressed to see if he needed help. Then heard six or seven gunshots and went back inside.

It is clear that this was not a suicidal youth trying to commit suicide by attacking a cop. This was a young kid hysterically running to the police for help because someone was chasing him. He wanted to live. Another sourced claims a rookie cop pulled out their firearm when the terrified youth failed to obey their direct commands and shot themself by accident while pulling out their gun. This shows the inherit problem of Depot. Brainwashing new recruits into believing that civilians have to obey their direct command at the snap of a finger or else. That has to stop. The police are supposed to serve and protect civilians not control and oppress them.

The public has a right to know who shot the police officer because it was not Hudson.