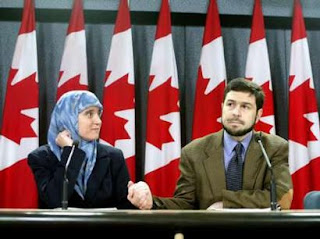 CBC is reporting that the RCMP have laid a charge in absentia against a Syrian intelligence officer accused of torturing Syrian-born Canadian Maher Arar, the first-ever charge of its kind in Canada. Arar's lawyer, Paul Champ, said in Ottawa today that RCMP will attempt to extradite Col. George Salloum to Canada to face a charge of torture, which RCMP later confirmed. A Canada-wide warrant and Interpol notice have been issued for his arrest.

I'm a little bit confused about jurisdiction but this certainly opens up Pandora's box and is no doubt driven by Stephen Harper's election campaign. The question we need to now ask is are we going to charge the United States government for torturing a 15 year old Canadian boy and all the others in Guantánamo bay as well as in all the other black CIA torture sites around the world? When George Bush came to Surrey there were many protesters calling for the RCMP to arrest him. Well how about it? Can we do that now finally? Can the RCMP charge Stephen Harper for knowingly handing over prisoners in Afghanistan to be tortured? Please advise.

According to Wikipedia, "Maher Arar is a telecommunications engineer with dual Syrian and Canadian citizenship who has resided in Canada since 1987. Arar was detained during a layover at John F. Kennedy International Airport in September 2002 on his way home to Canada from a family vacation in Tunis. He was held without charges in solitary confinement in the United States for nearly two weeks, questioned, and denied meaningful access to a lawyer. The US government suspected him of being a member of Al Qaeda and deported him, not to Canada, his current home and the passport on which he was traveling, but to Syria, even though its government is known to use torture. He was detained in Syria for almost a year, during which time he was tortured, according to the findings of a commission of inquiry ordered by the Canadian government, until his release to Canada. The Syrian government later stated that Arar was "completely innocent."[8][9] A Canadian commission publicly cleared Arar of any links to terrorism, and the government of Canada later settled out of court with Arar. He received C$10.5 million and Prime Minister Stephen Harper formally apologized to Arar for Canada's role in his terrible ordeal."

So here's the deal. Here's a Canadian with dual citizenship returning home from a holiday in Africa. The plane stops over at JFK on it's way back to Canada and he is unlawfully detained for two weeks. He asks for a lawyer and is told he does not have a right to a lawyer because he is not a US Citizen. That is satanic. I got into the same argument myself with US Border Agents who claimed Canadians randomly detained at the border unlawfully don't have a right to a lawyer because they are governed by Immigration law not the Constitution. That is a heinous lie.

The US Constitution says "No State shall deny to any person within it's jurisdiction equal protection of the law." The US Constitution says all people not all citizens. To claim that Canadians in the US don't have a right to a lawyer because they are not US Citizens is false. That's a Sarah Airhead Palin misinterpretation of the Constitution. The problem is, they disagree and a corrupt court upheld them. God help us. Oath keepers arise. 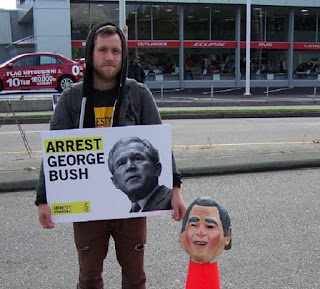