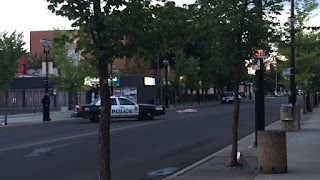 Prime time Crime is reporting that there has been recent homicides in Calgary and Edmonton. The Edmonton Sun is reporting that Nadine Skow, a 38-year-old employee of the YWCA in Lethbridge, was found stabbed to death in her suite at 104 Street and 106 Avenue in Edmonton this week. CBC is reporting that her ex-boyfriend has been accused of her murder. CBC is also reporting that a dead man was found lying on the road early this morning just off 118th Avenue. Homicide detectives were at the scene investigating what they're calling a "suspicious death."

The Calgary Sun is reporting that Gunfire claimed the life of a man outside his northwest Calgary home Thursday in the city’s third murder in less than a week. The Calgary Herald is reporting that "the man gunned down on a northwest Calgary street was a longtime, influential underworld figure once responsible for bringing large volumes of illegal drugs into the province."

The Vernon Morning Star is reporting that the body of a male in his 40's was found in Vernon at Poulson Park Wednesday morning. Infotel is reporting that police have identified the body as 42-year-old Jason Thomas Hardy, and believe foul play was involved in his death. Hardy has some history with police and was residing in the Vernon area.

Update: The Calgary Sun is reporting that Phillip Tu, who was gunned down in Calgary last week, had a brother named Donny Tu who was killed in like manner May 3 2010.