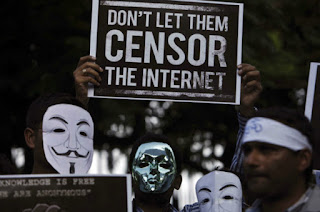 Today I'm going to launch a two part series on Internet Censorship. For Part 1 we're going to roll back the hands of time and look at Corporate Censorship through fraudulent copyright claims. To being with we'll talk about a case I was personally invoked with about Telus censoring videos on Youtube that Michael Geist wrote about and has now resulted in the Notice and Notice copyright system being implemented in Canada. In the US they have the Notice and Takedown system which as we shall see is filled with problems.

Back in the day I was a bit of a Labour activist so to speak. I supported the Telus employees who went on strike against their employer's use of off shore call centres. Sending Canadian jobs overseas is bad business. I had posted several videos about the dispute on Youtube. Songs employees wrote and performed, a bagpiper leading a picket line and various news reports on the strike. I also posted some exerts of Telus Idol which was a training video filled with sexual harassment. It was a spoof on American Idol and was totally inappropriate. They didn't just film it, they made all their employees watch it as a training video. When I posted it on Youtube they freaked and wanted it off the Internet as soon as possible.

So they contacted Yotube and asked the videos be removed because they violated Telus' copyright. They had all the videos taken off. Even the videos of the picketline and news reports. I complained to Youtube and said come on guys, take a look at the videos. There is no possible way they could own copyright to any of those videos. The only way I could get those videos back on Youtube was by filing a counter notification which I did. That in tern forced Telus to file a copyright claim with the courts which they did. Only they refused to serve me a copy of the claim. They once again tried to go ex parte - without me. It's a lot easier to argue your case when the other party isn't there to defend themselves.

Youtube ended up sending me a copy of their court application and I soon saw why they didn't want me present. They lied. They claimed Telus Idol was called Telus VOIP and was about Telus' voice over Internet protocol and was a copyrighted work. That was a bold faced lie. Telus Idol was a spoof on American Idol full of sexual harassment and had absolutely nothing to do with voice over Internet protocol. Nice try.

So I filled my response to the court objecting to them proceeding ex parte and pointed out that they lied in their application. They also made a fraudulent copyright claim on a whole list of other videos that had nothing to do with Telus Idol which they had no possible copyright claim on. Later I found out that one of their representatives said that the name of the CEO was protected by copyright and that they owned copyright to any video that uttered his name. It was absurd.

I remember meeting with a lawyer that represented Telus in Vancouver from the largest firm I had ever seen not to mention gone up against. He was trying to get me to take down another web site I had about the CEO. I said sorry, no can do. He said how about I make that trial in San Fransisco disappear. I laughed and said I'm not to worried about that trial. I filed a Motion to Dismiss on Jurisdiction and had everything in their wish list taken off their application and made sure the case was strictly about videos posted on Youtube. I'm allowed to E-file court documents. I'm allowed to make telephone appearances and I caught them lying in their initial application. Quite frankly, I'm not too worried about that trial. He just kinda looked at me and growled.

I said to him, I fully realize we don't have the same amount of chips on the table here. If the court finds Telus right and I have violated their copyright, I could be fined $500,000 and go to jail. If I'm right and Telus did in fact commit copyfraud, fraudulently claiming copyright to something so they could censor the Internet, they could be fined $2,000 which is nothing for a big corporation. I looked at the lawyer and said I am fully aware I have much more to lose here then your client. He just looked at me in shock as if to say you realize that and you are still going to proceed. I just nodded embarrassed and said yes as his stunned look said you are insane. I felt sorry for him and wrote him a nice tribute. He still uses my quote on his home page. I'm the adversary he quoted.