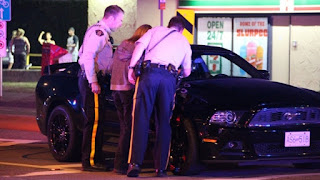 CBC is reporting that there was a shooting in Surrey 9:00 PM last night. "According to police, witnesses called 911 to report that the drivers of a silver Honda Civic and a Ford Mustang were chasing each other, with gunshots being fired between the cars. Officers located the Mustang, detained its three male occupants and found at least one bullet hole in the car."