Politics of the Pork Barrel 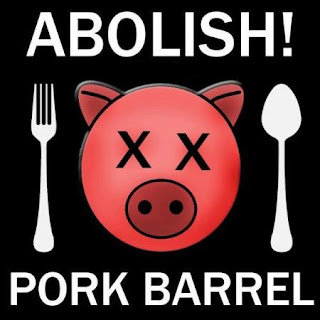 As the Canadian election kicks off the parade of politicians spewing ridiculous campaign promises has begun. Mulclair came to Vancouver and promised more money for Transit. Then he came to Surrey and promised more money for police. Likewise Harper and Justin are promising the moon. I think voters in BC and more specifically here in Surrey, don't want to hear a political promise they are going to spend more money on anything. I think they want politicians to be fiscally responsible and lower taxes for everyone not just for the rich and not just for the poor. When the government is fiscally responsible and taxes are low for everyone, business prospers and tax revenue increases.

Think about it. Many years ago Ireland was poor. Then the government had an idea. They figured that 80% of nothing is nothing while 10% of something is something so they offered a tax incentive to corporations. They gave large corporations huge tax breaks. As a result, large corporation moved in and started doing business in Ireland. The Shannon Industrial Park opened up and all of a sudden all these high tech industries set up shop right beside Paddy and Mic's sheep farm. They began to prosper.

Alberta is an excellent model. It's just unfortunate that Stephen Harper had destroyed that model when he went to Ottawa. Alberta has no sales tax. As a result, businesses are attracted to that province. This creates jobs and tax revenue because people working at those jobs pay income tax. Alberta even went one step further. They were doing so well financially they started paying everyone's medical insurance premiums. That almost a socialist idea yet Alberta is very conservative. For them it's just good business and that it is. It just makes sense.

I like Thomas Mulclair because he's a good guy and he's the only one supporting the Canadian Charter of Rights in defense of civil liberty. That is my primary election issue. However, I recognize that no political party is perfect. The Neo Cons keep parroting the same old stereotype that the NDP will tax and spend. Yet Harper has done a far worse job of spending tax dollars then any NDP government has ever dreamed of. Harper was the driving force behind the HST in BC that voters rejected. That is why Harper gave his buddy Gordon Campbell that offensive job as a high commission. Taxing things that are normally tax exempt is not a reduction in taxes. The HST killed a lot of local restaurants before it was finally over turned.

Yet when Thomas Mulcair comes to Vancouver and promises more money for Transit I'm like hold the door. That might be fine in Ontario but in BC Translink is a fiscal disaster. They already are over budget a billion dollars every year and suck that much money up in a regional gas tax above and beyond all the other gas tax. Consumers pay for the gas tax because everything we buy in stores gets shipped there on trucks. In BC we just had a referendum on raising sales tax to pour even more tax dollars into that fiscal nightmare and the voters said no. So promising more money for transit isn't going to win votes here. Forcing Translink to balance their budget will. The fact that SNC-Lavalin got the contract for the Evergreen line was a criminal act all on it's own.

So Thomas comes to Surrey and offers more money for police. Well that's nice but even Surrey's Worst has promised that finally. We have seen that more police officers is indeed helpful but that is not the solution in itself. If we start arresting crack dealers outside the Front Room in Whalley and in Newton then that would certainly make a huge difference to the violent crime in Surrey but that's not going to happen as long as Bill Fordy is in charge. He needs to be transferred out of the City before we can start finally addressing the violent crime in Surrey like we should. Peace.

Posted by Dennis Watson at 8:16 AM