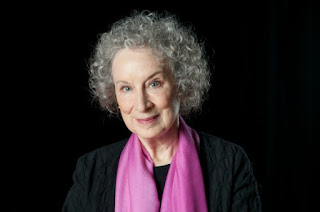 Margaret Atwood ran an amusing editorial in the National Post mocking Stephen Harper's attack adds on Justine Trudeau which seem to focus on an obsession with his hair. The controversy arises in how much the National Post ended up editing her article. The editing doesn't seem to be too extreme and has me wondering if it ties in with the subject of SLAPP law suits. Newspapers don't like to waste money on lawsuits. Perhaps they were simply covering their ass so to speak.

In her article she asks: Let’s try this hair quiz:

Of the three national male leaders, which one travels with a personal grooming assistant -lavishly paid for in whole or in part by you, gentle taxpayer—so that none of his hairs will ever be out of place, supposing they are indeed his and not a wig, as some have supposed? (Hint: Initials are S.H.) Which leader, on the other hand, doesn’t need such an assistant because his hair is “nice” enough already? (Hint: initials are J.T.) And which one wouldn’t know what a personal grooming assistant was if he fell over one? (Hint: Initials are T.M.)