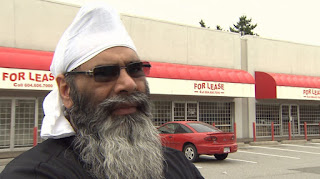 CTV reported that "Former Sikh activist Amrit Rai was arrested at Freedom for Life Recovery House on May 18 and police seized the money and heroin, adding another twist to his storied life and casting doubt among those in the recovery business about whether addicts seeking help can get it from this unregulated facility in Surrey."

Blaze was actually the one that brought this to my attentions. However it isn't right beside the Front Room like he claims where the crack dealers sell crack openly. It was at 106 Avenue off 148th Street. Just because it's a brown guy doesn't mean he wasn't getting it from the Hells Angels. We know the Dhurry Dhak group are Hells Angels rivals but we know Randy Naicker was a Hells Angels associate and that Rajinder Singh Sandhu is a full patch member in Nanaimo.

When Lenny was being threatened by Stuart Mcfarlan for testifying against Paul Dean Freeman in 87/88, he had a house full of brown guys with guns protecting him. I realize the Hells Angels aren't the only ones that sell drugs in Surrey. I just know they supply the dealers outside the Front Room which is the epicenter of drug related violence in Surrey. Tbarz was named as the hub of a Hells Angels cross border drug trafficking ring. Randy Jones' brother Trevor is still waiting to be extradited for that case.

The point of this story is unregulated recovery houses that become flop houses for drug trafficking and exploitation. Deregulation has once again promoted criminal activity.