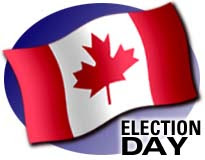 CBC is reporting that "Prime Minister Stephen Harper will call an election as early as this Sunday, kicking off what would be the longest federal election campaign in modern history, CBC News has confirmed." Obviously a long election means more money spent on advertizing.

Speaking of which, there has been a colossal change in the new world order that continues uncontested. What is with all these election adds that have aired when there is no election on? What is with that? Normally, election commercials are only run during an election. Now Harper is bombarding voters with election commercials when there is no election on. That is a huge change in policy that needs to be contested. One concern is the reporting of money spent on election campaigns. The other concern is the use of tax dollars for political propaganda.

This is indeed a pivotal election with extreme issues on the table. We have Stephen Harper's Police State in competition with Justin Trudeau's Clown State. Yet when push comes to shove the real issue on the table is civil liberty.

Stephen Harper is no Preston Manning. He is not fiscally responsible and he does not support civil liberty. Neither does Justin Trudeau. That was a huge shock. His father was the one that gave us the sacred charter of rights. Justin has stood with Stephen Harper in it's ultimate demise. That is very disappointing. Bill C-51 is illegal. The only ones that recognize that are the NDP, the Green Party and the Bloc Quebecois. Peace. 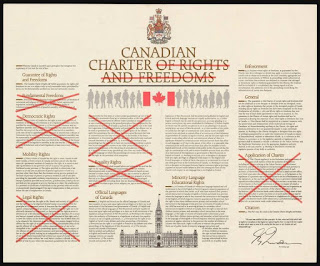 Parliament has been dissolved and the election is now set for October 19th.

The Toronto Star is reporting that "the New Democrats have surged to a double-digit lead in public support, gaining more distance over the other federal parties than they have at any time in the past two years, according to a new Forum Research poll."

Perhaps this is the only way to save the Charter of Rights. If the NDP screw up, replace them. It's that simple. But they can't screw up any more then the Liberals and the Neo Cons have. Right now fiscal responsibility and civil liberty are the two main issues on the table that go hand in hand. Well over 65 billion tax dollars for a bail out the banks didn't need and a billion dollar spy palace to spy on Canadians not for criminal activity but for political affiliations is not fiscally responsible.